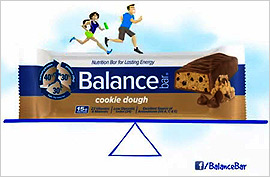 Balance Bar -- one of America’s first nutrition/energy bar products (launched in 1992) -- is looking to revive the brand’s mojo with a campaign that includes its first national television ads in over a decade.

“This category in general does not focus on TV, so we’re excited about the opportunity to break through with our message,” says Erin Lifeso, senior director of marketing for Balance Bar. “In the past, we primarily focused on select print and online ads, as well as grassroots marketing opportunities, which we’ll continue to do as part of this campaign.”

The campaign’s creative features an illustrated couple looking to find their nutritional balance within today’s “teeter-totter,” on-the-go lifestyles -- and finding it in Balance Bar’s nutrition model (which the brand says balances carbs, protein and dietary fat on a 40/30/30 ratio, to maintain normal blood-sugar levels and lasting, balanced energy).

NBTY CMO Katia Facchetti cites recent Nielsen and SymphonyIRI data that respectively confirm that the nutrition/energy bar category is growing at double-digit rates, and that more than a third of Americans often eat snacks instead of meals when on-the-go.

“This growing consumer trend of needing convenient every-day products that will give you the sustained energy to keep you going is a perfect fit for what Balance Bar has always provided – balanced nutrition for long-lasting energy in a great-tasting bar,” Facchetti says.

Balance Bar’s first new TV spot is airing now on national networks and national cable, including ABC (“Good Morning America”), AMC (“Mad Men”) and the TBS, USA, TNT and Discovery networks. That spot and others will run between now and August.

The campaign’s print ads are also between now and August, in People magazine.

The brand is currently promoting a Facebook sweepstakes offering fans a chance to win a trip to see the Northern Lights in Alaska to celebrate the brand’s newly launched Balance Bar Dark line (offering three new flavors with dark-chocolate coating – and according to NBTY, the first energy-bar line to include 100% Rainforest Alliance Certified cocoa and bear that seal).

Sweeps contestants are being asked to “own the dark” by finding hidden codes in various images posted online at Balance.com, and the brand’s Facebook and Twitter accounts, as well as on coupons at sampling events through June 14. (Balance Bar currently shows nearly 151,000 Facebook “likes” and nearly 4,000 Twitter followers.)

NBYT, which was acquired by an affiliate of Carlyle in 2010 and describes itself as “the leading vertically-integrated manufacturer, marketer, distributor and retailer of high-quality vitamins, nutritional supplements and related products” in the U.S. (with operations worldwide), spent approximately $152 million on advertising across its brands in fiscal 2012 (ended September 30), according to its SEC Form 10-K annual filing.