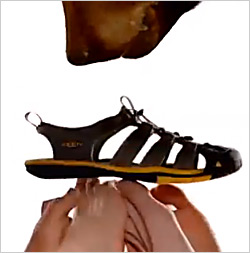 To interest outdoorsy types in its new lightweight CNX line, Keen Footwear is introducing them to its “Brave New Toes” campaign, as it continues to expand its retail footprint.

Fifteen-second videos feature a crowd of happy toes, ooh-ing and aah-ing at the comfort of the CNX line, with action featuring everything from a bear scare to toe-mance. “The idea is to show how this new line is both lightweight and protective,” Linda Balfour, the brand’s director of marketing, tells Marketing Daily. The new collection includes 20 styles, all weighing less than 10 ounces.

Initial reactions to the new spots have been so positive that the company is releasing a series of behind-the-scenes videos about the making of the campaign, “to show what went into getting 50 toes into a 3-foot area.”

A print version is also running in Outside, and social media efforts include a Twitter campaign, “where we set fans on some brave adventures and had a Twitter hunt,” she says.

Balfour says the new effort is in keeping with the brand’s current positioning, which she describes as irreverent and creative.

“We wanted to tie the spirit of the 'Brave New Toes’ into the playfulness of our brand. And in the past few years, we’ve put a lot behind our 'Recess is back’ campaign, which also speaks to the importance of play. People are telling us that they love the idea of this hybrid lifestyle, and that we can help people get outside and play.”

That campaign includes a downloadable toolkit for corporate recess, as well as a cause component, generating funds to protect the many places Keen fans consider their playground.

Part of what differentiates the brand from its competitors, Balfour says, “is a much more inclusive definition of what we mean by outdoors. We think of it as anything without a ceiling. So it’s equally the Half Dome of Yosemite and the neighborhood park.”

The brand, which she says primarily competes with Merrill, Timberland and Teva, “has an audience that ranges from the mid-20s to active Baby Boomers.”

She says the company is also poised to “take a deep dive into a branding refresh,” which will start to be evident to consumers next spring.

In addition, the company is on the verge of opening a fourth “Garage,” as it calls its retail stores -- this one in Palo Alto, Calif. The company already has stores at its Portland, Ore. headquarters, and in Toronto and Tokyo’s Harajuku district.

All stores are made from repurposed materials, “and very much in keeping with the brand’s personality, so it gives us a chance to have conversations with our fans. Our plan is to keep it small and limited to cities with the greatest concentration of fans.”