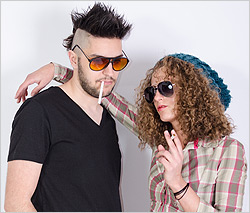 It's about the platform, baby. Engaging Millennials in world peace means getting them to Facebook, Instagram and other points of digital society to pony up. But making them shed some lettuce means having them see what they're shelling out for.

Apparently, per a Social Innovation Summit panel on Millennials’ baked-in altruism, the cohort is a lot more likely than older people to give of themselves, especially when the giving is through Google Glass (well, it isn’t yet, but who knows...). Lesson: if you’re a corporation, Millennials can tell if you’ve created a culture that makes doing good as important as making money; or better yet, if you’re making money by doing good. But they can also tell when you’re making money, then making your money do the good you should be doing. Or something like that.

Indeed, to paraphrase the panelists, younger people are like Ray Milland in “Man With The X-Ray Eyes” when it comes to being hip to a corporation's inner motivation for helping the world. (Millennials, of course, won't get that filmic reference any more than one of the panelists at the event -- a really smart guy, too -- got a reference to the conference room looking just like the war room from "Dr. Strangelove" wherein George C. Scott had his rabid-dog moment).

Said Jeff Senne, director of corporate responsibility and operations lead at PwC: "The idea of social innovation and opportunity has to be baked in, not bolted on." In other words, paying indulgences won't play with younger people: If you're making computers with cobalt dug up in mines run by slavers, but giving to the Somaly Mam Foundation, you may get into heaven but you won't get traction with the hipster from MIT you’re courting for the C++ job.

Libby Leffler, who manages strategic partnerships at Facebook, noted that 93% of Millennials use internet, the same percentage mobile, and 63% use smartphones. Also, Facebook is "cause agnostic." She said 75% of Millennials gave last year, with 15% giving over $500. But they don't want to give if they can't see the tangibles. Charity: Water, which helps dig wells and uses Facebook to show on which well your money is bestowed was an example she provided.

Another point Senne made was that Millennials are a lot less loyal than past generations -- a fact he said is evinced by their expectation of holding six or more jobs during their careers. Scott Stimpfel, assistant dean of student engagement and innovation at NYU Stern, added a corrective: it's not that their job expectations demonstrate that Millennials are loyalty-challenged; it's they expect to be rewarded for their loyalty by getting keel hauled. "A lot of this generation anticipate they will be fired. They also have an anticipation of how their employer will treat them."