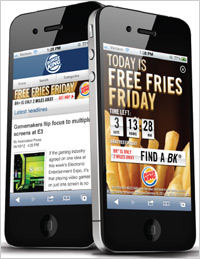 Mobile campaigns for quick-serve and casual dining restaurants are all about driving foot traffic. That makes having a location component more likely for companies like Burger King, McDonald’s, Olive Garden and Caribou Coffee. A new report says that 70% of QSR/casual campaigns involve some type of location targeting.

Based on a review of 100 campaigns run between January 2012 and March 2013, location-based mobile ad network Verve Mobile found those that included location targeting had twice the response rate of ones without location data, with an average click-through rate of 1.21% to .61%.

The bulk (55%) of marketers in the QSR/casual dining category typically relied on standard geotargeting in ad efforts, narrowing the scope of promotions to a city or Designated Marketing Area (DMA).  About 28% used geo-fencing around a restaurant, and 17% turned to audience-based targeting down to the neighborhood level.

The Verve report highlighted one geotargeted campaign for a QSR client aimed at promoting a new discount menu. It involved using standard banner ads with “tap-to-map” functionality and expandable units with an interactive menu gallery and social media features. Time spent with the banner ad ranged from one to 15 seconds, and averaged 23 seconds for the expandable unit. The overall click-through rate was 3.2%.

By contrast, soccer moms, vacation travelers and sports enthusiasts had high engagement rates for offers. None of that is surprising. But less obvious audience groups, like pet lovers and techies, were more likely to be receptive to offers, according to the Verve research.

What’s  key in mobile is what happens after the click, noted Jed Williams, director of consulting and a senior analyst for local media research firm BIA/Kelsey. “We're seeing robust numbers around click-to-call, mapping/directions, even product look-ups and reviews. All of which are down-funnel engagements that are significantly closer to purchase,” he said.

In that vein, the Verve study pointed to a recent test in connection with a campaign for a casual dining chain that showed more than a threefold lift in foot traffic. The test compared those who saw an ad with those who didn’t but had previously visited one of the chain’s restaurants. The campaign used both standard and competitive geo-fencing, or geo-conquesting.

The ad served near the advertiser’s location led to a 3.9 times lift in foot traffic while decreasing the likelihood someone would go to competing restaurants nearby by 20%. People served ads around a competing outlet were 3.1 times more likely to go to the advertiser’s restaurant and 18% less likely to patronize the competitor’s.

Verve acknowledged that its approach to attribution only measures users on location-aware apps that a user happens to open inside a location. That means its findings skew toward venues that invite leisure time, like casual restaurants and big-box stores as opposed to ones that lead to quicker, in-and-out purchases.

Separate data from Verve Mobile rival xAd last week indicated restaurants are among the top industry groupings when it comes to mobile location advertising. Spending in the category ranked third behind financial services and telecom in the first quarter on the xAd network.