In a development bound to send ripples across both Madison Avenue and the television industry, a new “audience-buying” platform has quietly rolled out an automated system enabling agencies and their trading desks to serve ads into the most premium network television inventory. Since it went live in January with a beta being used by the trading desks of at least two of the biggest agency holding companies, the new platform, dubbed AudienceXpress, has served nearly 2 billion ad impressions to network TV viewers nationwide -- all below the radar of most of the TV advertising industry.

The system, a spinoff of targeted TV ad server Visible World, has managed to pull off what big players ranging from Google (Google TV Ads), Microsoft (Navic) and startups like Spotrunner (Malibu) and a host of failed dot-com era ventures, essentially failed to do: Convince a critical mass of TV industry suppliers to put enough advertising inventory into an exchange that would create enough scale for big agencies and advertisers to use it.

Because of its implications for the overall media marketplace, the rapid rise of programmatic trading in the online display advertising marketplace has been one of the most closely watched developments of the past couple of years, splitting Madison Avenue and its media supply chain into two philosophical camps: Those that want to preserve the world of old-school media-buying based on relationships, sales hype, marketing spin and person-to-person negotiations; and those who want to shift to a new world of “audience-buying” based on scientific, real-time programmatic technology enabling brands to reach the audiences -- and just those audiences -- they are seeking to reach with their precious ad budgets at that exact moment in time.

The secret behind that success, says Walt Horstman the long-time Visible World exec who developed and manages the AudienceXpress platform, was convincing the supply side that they were 100% in control of how, when, to whom and for how much their advertising inventory got sold.

“The inventory partners we work with are extremely sensitive,” Horstman explained in an exclusive briefing with MediaDailyNews. “If there is one thing folks in the TV business are incredibly sensitive about, it’s protecting the value of their inventory.”

In fact, it has been the fear of losing control over the value of advertising inventory that has been the major impediment to programmatic exchanges in the online business, but that hasn’t stopped the online display market, and now even highly coveted social media like Facebook’s Exchange, and even emerging mobile DSPs from developing a marketplace based on sell-side machines trading with buy-side ones. While supply was a big factor in the success of programmatic trading online, other big factors including the needs for agencies to improve their margins by utilizing technology to automate the way they buy in an increasingly fragmented media marketplace, as well as their philosophical shift from old school “media-buying” based on the seller’s inventory to the new world of “audience-buying” based on reaching the consumers -- and only those consumers -- that their clients’ brands want to reach with their ad messages.

It’s not clear exactly how much of Madison Avenue’s media buys are actually traded this way now. According to the most recent estimates from Interpublic’s Magna unit, programmatic buying of media currently represents about 25% of online display buys, and is growing fast. Magna predicts it will grow to 43% of online buys by 2017. Magna has not forecasted how programmatic trading will impact other media, because with the exception of social and mobile, the rest of the supply chain has been slow to adopt automated trading technology, but last week a top Magna media-buying exec, Executive Vice President Todd Gordon, told attendees at a Nielsen event produced by Beet.TV that programmatic buying would represent the vast majority of the way its agencies buy media within three years.

The big trick, says AudienceXpress’ Horstman, is ensuring that the sell-side -- especially extremely inventory-sensitive suppliers like the TV industry -- have control and can understand the upside of trading that way. One of the ways that AudienceXpress has done that is by giving TV suppliers complete, real-time transparency on the supply-and-demand of their inventory, including the exact pricing and yield they fetch when they put their inventory into AudienceXpress to be traded programmatically. Horstman admits that the system was designed initially to give those optics mainly to the sellers, but he says it is rapidly refining its “front-end” systems so that agencies and their trading desks can get a better view of the value of the audiences they’re looking to buy from those suppliers. He says the goal is to integrate both those front-end interfaces and the back-end trading systems to have what people in the ad tech world call a complete “end-to-end” system sometime this year.

In the meantime, that has not stopped at least two major agency trading desks from processing nearly 2 billion impressions through the system in the six months it’s been up-and-running. Horstman would not disclose the names of the agency trading desks using it, but they are known to be two of the most active and aggressive developers of programmatic trading. He also would not disclose the identities of the suppliers placing their inventory into the programmatic trading platform, but he said they are among the major cable TV operators that Visible World has integrated its target ad serving technology with, and that it is that infrastructure that is enabling the automated trading to happen.

Visible World claims it ad serving technology is integrated into systems representing about 80% of U.S. cable TV households. Based on the number of systems actually trading through AudienceXpress’ platform, it currently reaches 50 million homes, but a spokesperson said the company is “onboarding new partners each quarter.”

One reason those cable operators are moving so quickly to utilize the system is it gives them an incredibly efficient means of selling their TV advertising inventory to national advertisers in a way that does not cannibalize on the local and regional buys sold by their direct, in-house sales organizations or their reps.

And if there’s a rub in AudienceXpress’ system, this is where it most likely is, because the system essentially enables local cable operators to efficiently and automatically pool the local TV advertising avails they split with their cable network partners into an audience trading platform that taps the budgets of national advertisers. In other words, it enables local cable TV operators to compete directly for ad budgets with the national advertising sales organizations of their network affiliates. Generally, national cable TV networks give two minutes per hour to cable systems to sell as part of their distribution agreements. The language stipulating how those ad units can be sold is said to be somewhat vague, and there are also times when national TV networks segment their inventory to regional or local advertisers that create conflicts on the local side of the ledger sheet too.

It’s unclear how and when national TV network will play directly in the programmatic exchange business. Attempts by other platforms to convince them, including Google’s, Microsoft’s and others have largely failed, because they did not want to lose control over how their inventory was priced, even though many of those systems were designed as “private exchanges” where sellers controlled the “floors” or minimum price that their ads got sold at. The most successful previous attempt, Google TV Ads, mainly aggregated unsold, “remnant” local TV inventory that was wildly popular among direct response TV advertisers and agencies, but failed to scale with big brands and media-buying shops.

But programmatic trading has matured significantly on Madison Avenue, and every major agency now has its own trading desk, or works with an array of independents. Almost all of them claim to be either currently buying or close to developing a solution for buying TV advertising inventory through their systems. According to Horstman, at least two are doing so significantly now.

That said, he emphasizes that everything about the way AudienceXpress works is designed to benefit the sell-side of the TV marketplace, and that everything it does to make it easier, automated, more efficient and scientific for agencies and brands to use is simply to the benefit of its cable TV partners. The benefit to Madison Avenue, he says, is a byproduct of that.

“We are an SSP,” Horstman finally conceded after being pressed by MediaDailyNews to categorize AudienceXpress among the litany of ad tech acronyms. An SSP, or “sell-side platform,” is an ad tech platform that is built to give as much control to the seller of media inventory as possible. It is the yin to the yang of the so-called DSPs -- or demand-side platforms -- that agencies and brands use to make their “bids” for inventory on audience exchanges.

“We are not an exchange. This is not an auction. This is not RTB,” he said, referring to another acronym for “real-time bidding” that is an auction-based audience-buying model that is popular among agencies and DSPs, but has been one of the major emotional impediments to premium media sellers like TV outlets to participate in the programmatic marketplace.

“In the minds of TV folks, that means devaluing your inventory,” he explains. “Our value proposition to the entire ecosystem is to provide liquidity -- largely for the sell-side -- and the way we provide liquidity is by creating ease of access for the buy-side. We’re doing that by using the technology we have on the back-end and the front end, and then applying audience data to it that increases the value of that inventory to advertisers.” 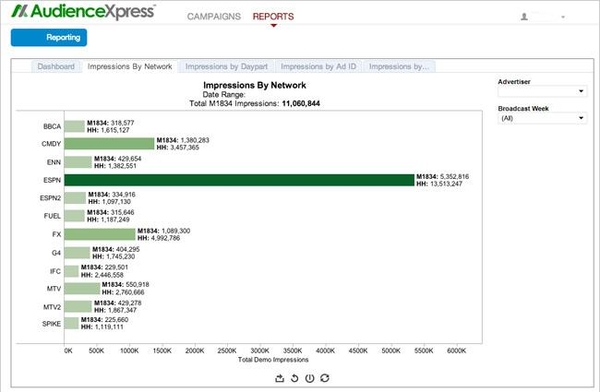