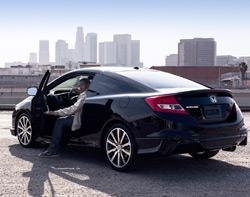 Honda this week launches an urban-market multicultural campaign for its 2013 Civic, starring performer and "America's Got Talent" host Nick Cannon. The effort, "Best Yourself," is primarily digital and social, but there is a 60-second TV spot as well. Intended to get people to engage online at www.access.honda.com and Honda’s social network, the ad will first air on the Aug. 11 season debut of the tent-pole open mic, and then on African-American media.

The ad itself is a distillation of a now-live two-minute online video. It has Cannon driving the Civic around Los Angeles while his voiceover, a life lesson-style pep talk about the virtues of hard work and will power, extolls the virtues of hard work, persistence and will power -- a subtle nod to Honda’s own philosophy. It also cleaves to the TV show's basic theme: believe in yourself and you can make it.

Gina Jorge, assistant manager of multicultural marketing at Honda Motor's Torrance, Calif.-based U.S. marketing arm, tells Marketing Daily that the media buy around the show and the fact that its host is in the ad notwithstanding, the campaign isn’t branded entertainment and there’s no tie-in with “Talent.”

“We had several candidates and concepts and chose Cannon because we felt his personal story had the most connection to what we wanted to communicate,” she says. “And the fact that he has a huge social media network, a huge Twitter following, and has his own projects in the works added up to why he was such a great fit.”

The effort also aligns with Honda's "Innovators" campaign, which launched early this year, spotlighting inventors, technologists and designers. "We developed synergy with that: it's about how to take that Honda concept of continuous improvement to a Millennial mindset."

Honda says media platforms for the effort include AOL/Huffington Post, Complex Media Network and Ballislife.com with video distribution through YouTube and Visible Measures. The automaker will also get the word out with ad units driving consumers to access.honda.com, which hosts the full video and other content.

Separately, Honda is doing something on social media in September focused on vintage culture: the drive-in movie theatre. Jorge says the online campaign lets communities enter their drive-in movie theatre for a chance to be one of five that Honda will choose to update with digital projectors. The five will be chosen based on social-media voting, she says. The site for that is ProjectDriveIn.com. At issue is that drive-ins -- mostly family-owned -- have old-school film projectors. It costs about $150,000 to go digital. “So far, almost 60 drive-ins have signed up,” says Jorge. No word on whether the upgrade includes the snack bar.