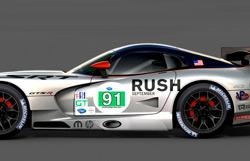 Chrysler, LLC is back in the movie business in the next effort of its burgeoning studio partnership strategy, which has included a role in the recent “Fast and Furious” movie and a central brand position against SyFy show (and online game) “Defiance.”

This time, the automaker has its high-performance marque SRT (Street & Racing Technology) under the klieg lights. The deal with Universal Pictures involves the Ron Howard-helmed biopic “Rush” about Formula 1 driver Niki Lauda. The film follows the Austrian racer’s horrific crash in 1976, and his phoenix-like recovery and return to the track.

SRT is getting involved on a number of levels, including promotional, social, digital, grass roots and branding on its Viper race cars: the SRT brand has graphics from the film on its American Le Mans Series (ALMS) racer the No. 91 Rush SRT Viper GTS-R.

Beth Paretta, director, SRT brand and motorsports marketing and operations, tells Marketing Daily that since the movie is an historical piece, there obviously isn’t much of an opportunity for SRT product placement in the film, though sibling brand Ram actually did put a vintage pickup truck in the recent Warner Bros. film “Man of Steel.”

"SRT owners and fans are performance and racing enthusiasts to the core,” says Paretta, “which is why SRT wanted to help promote the movie to our fans via visibility at upcoming ALMS races, SRT social media sites and on the brand website. But we are not advertising in-cinema," she says.

The SRT brand debuted its first-ever advertising campaign in June around the SRT versions of Charger, Challenger, Viper, Grand Cherokee and Chrysler 300. The campaign comprises 30-, 60-, and 90-second spots still in rotation across cable, per Paretta. Charger SRT8 and Challenger SRT8 vehicles featured in this summer’s “Fast & Furious 6.”

Paretta points out that besides the web site, the brand also has a constant presence on Facebook and Twitter along with its own YouTube channel as well as a weekly e-newsletter on its participation in GT Class of the ALMS races, and other content.

SRT also has grass roots programs at ALMS races with displays, fan interactions, car corrals and merchandising, in addition to the two Viper GTS-R race cars competing, notes Paretta. She adds that SRT is also the title sponsor of this weekend’s Grand Prix of Baltimore Presented by SRT.

The brand has just completed the third year of the SRT Tour lifestyle program that goes to car clubs and dealerships and participates in "cruises" -- automotive parades. "The Viper is our flagship performance car on and off the track."