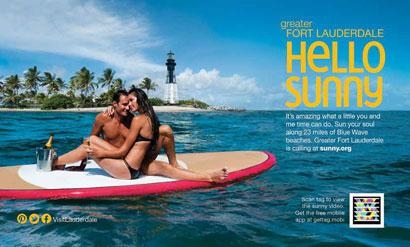 Fort Lauderdale is partnering with JetBlue in a campaign targeting cold New Yorkers this January with marketing  \that reminds them “The Beach Looks Good on You.”

“We are once again raising the bar with a $6.5 million advertising program, the most ever spent in the bureau’s history, and aim to shatter our record-breaking tourism numbers in 2014,” said Nicki E. Grossman, president, Greater Fort Lauderdale Convention & Visitors Bureau, in a release.

With 46 consecutive months of visitor growth and an 8% increase in tourist tax collections, the region is on target to welcome 13 million visitors by December 2013, spending $10 billion.

The New York campaign will be staged during the week leading up to Super Bowl XLVIII. It will take place at Grand Central Terminal's Vanderbilt Hall, which will be turned into a "beach" with huge screens of the live beachcam, giant sunglasses for photo ops, ivideos for social media sharing and solar-powered charging stations for mobile devices.

Partnering with JetBlue Airways, trips to the Greater Fort Lauderdale area will be given away every hour. After the one-day event, the entire display moves to JetBlue Airways JFK Terminal 5 in New York for one week, through Super Bowl Monday.

The partnership also includes in-flight promotions to sunny status where random passengers receive "Sunny Status" with a free drink and tote bag and sunglasses. Hello Sunny on the in-flight TV seat backs, a promotional Fort Lauderdale weekend to see Justin Timberlake at the BB&T Center in March and "Sunny" and Cher in May.

Greater Fort Lauderdale branding in NYC continues with billboards at Times Square and near the Lincoln Tunnel to “feel the warmth” as Super Bowl fans head to the stadium for the Big Game.