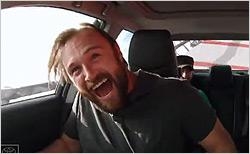 Camry is reliable. It's safe. It's the best way to get from your house to daycare. Snore. With younger people filling up the buyer queues, Toyota put excitement at the fore to tout the 2014 Camry. With one execution, Toyota turned a test-drive into a thrill ride, with consumers taking away both a video of their experience and a new perception of the car.

To align the theme park theme with a theme park setting, Toyota built a roller coaster-like drive course at L.A.'s Six Flags Magic Mountain. Complete with the requisite climb and (three-story) plummet, high-speed tunnel runs and banked turns, the course used the the SE and LXE hybrid variants as "cars," with professional drivers at the wheel and screaming participants in the back.

As part of the program riders were encouraged to film "selfies" of their ride via their own smartphones or devices provided by Toyota. The automaker also created a campaign out of the experience that comprises TV and interactive elements including video banners that allow users to "drive" the Camry on the course using keyboard controls without leaving the page in which the ad is embedded.

Colin Morisako, Toyota advertising manager, tells Marketing Daily that the two-day September event brought over 200 participant -- a number limited by time-slot availability, as Toyota wanted to give ample time for each participant to experience the course. The idea was that people who took the ride would put their videos on public social channels, allowing Toyota to give the footage a boost, thereby creating a much wider social-media audience for the car.

Morisako concedes that the social aspect of the program turned out to be a bit of a learning experience, since a lot of videos went into participants' social walled gardens. "We were hoping to get more activity than we thought we’d get; but we found that when [participants] did selfies they posted them on their private social channels so we couldn't use them." He said that about a quarter of participants posted videos of themselves for public consumption.

The first flight of ads ran through mid-September, per Morisako. "Then we ran through about the middle of October and we are going to pick it up again on the first of November."

The TV component comprises three TV spots — one 60-second and two :30s. "We want to get younger people in the segment. We have done a lot of research and found that beyond the rational reasons [for buying a mid-size car] there is real emotion and we wanted to draw that out; the venue allowed us to show Camry's capability and allow people to experience and react to it."

As a couple of participants say at the outset of the spot, "Exciting is probably not the word I would use to describe Camry." And, “It's the car to go grocery shopping in." At the end of the automotive roller coaster ride, one guy says, "I take back what I said about the Camry."