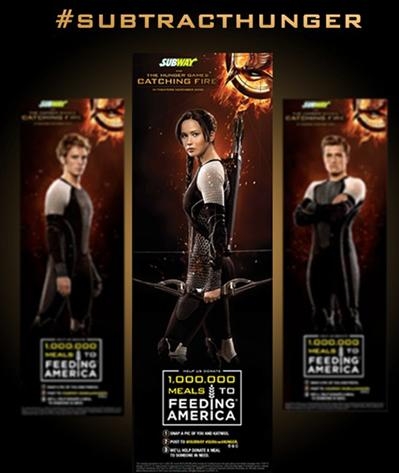 As part of its integrated tie-in campaign with Lionsgate's “The Hunger Games: Catching Fire,” Subway recently employed its social assets to offer fans the exclusive online debut of a new TV spot for the movie, which will open on Nov. 22.

Posted on Nov. 4, the one-minute preview spot, featuring Christina Aguilera's "We Remain" from the movie's soundtrack, has so far driven more than 30,000 "likes" and about the same number of shares on Facebook, and about 300 retweets and 250 favorites on Twitter, notes Subway VP global marketing Jeff Larson.

Subway has also co-released other trailers for this second installment of The Hunger Games movie franchise since the campaign kicked off over the summer, including one released during Comic Con in July.

The trailers, and videos combining clips and Subway promos, are among many elements in the campaign, which is timed to support Subway's current limited-time promotion: a line of "Fiery Footlongs" (plus a breakfast sandwich) featuring sriracha sauce made from chili peppers.

More than one media pundit has noted the irony of promoting foot-long sandwiches in association with "The Hunger Games" franchise. (Some Subway videos tie the notion of the need to be bold to win the games at the center of the movie to messaging that challenges viewers to make the "bold" choice of trying the new fiery sandwiches.)

Fans can help donate a meal by snapping a photo of themselves next to one of the standees of characters from the movie that are in Subway's restaurants now [graphic shown above], and posting the photo to @SUBWAY #SUBtractHunger. Such postings also qualify participants to be entered for prizes like signed movie posters.

Sweeps are a key element. In a "Path to Victory" sweeps, fans can enter online, using codes found on collectible 30-oz. cups and bags of Frito Lay Wavy Ranch chips, for chances to win prizes including a trip for four to Oahu, Hawaii (where the movie was filmed), a trip for two to the film’s premiere in Los Angeles, a VIP concert experience to see the winner’s artist of choice from the movie’s soundtrack, a private screening of movie for a winner and friends, and free subs for a year.

Subway has been running giveaways and contests on radio and other local media to win tickets to its exclusive screenings, in theaters in 24 U.S. cities, of a live-feed of a the movie's premiere in L.A. on Nov. 18, including the pre-screening red-carpet action.

Numerous challenges to win various movie-themed and Subway prizes are being run on Twitter (#SubwayVictoryChallenges) and promoted on Facebook.

In addition, Subway has a partnership with Wal-Mart in which consumers who pre-purchase the movie's Blu-ray DVD combo pack in Walmart stores (the DVD package will be mailed to purchasers in Spring 2014) get a Subway BOGO promotion (buy a 6" sandwich and a drink and get another 6" sub free).

Pre-purchasers of the DVD package (who use a code on a Walmart-supplied voucher to go online and provide their mailing addresses) also get access to exclusive video content from the movie, on Vudu.

Also, Subway locations within about 1,500 Walmart stores are offering exclusive versions of movie-themed collectible cups, according to Larson.