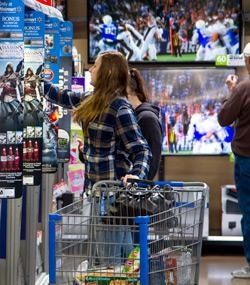 With holiday shopping slowing down, retailers like Kohl’s and Walmart are stepping up their game, with further price cuts and promotional efforts meant to woo consumers back to stores. Kohl’s says it has already awarded more than $1 million in its massive holiday sweepstakes. And Walmart is making big cuts on popular electronics, and trumpeting it largest shipment yet of new PlayStation 4.

The moves come amidst the traditional lull week for retailers, after the frenzied push of Black Friday events, but before shoppers are seized by last-minute panic. The International Council of Shopping Centers reports that weekly retail sales for the week ending Dec. 7 slipped 1.6%. On a year-over-year basis, the pace slowed 1.5%.

“Cyber Monday sales (included in the current week’s period) helped lift online business for the retail industry,” says Michael Niemira, ICSC vice president of research and chief economist, in its release. “However. with about two and a half weeks remaining in the 2013 holiday shopping season—which according to the ICSC-GS tracking survey—is less than half done (46.7% vs. 51.0% in the same week of 2012), consumers may likely select more gift cards to ramp up that completion rate, and pre-Christmas weekend shopping is expected to be very busy.”

Kohl’s says it intends to hand out  30,000 Dream Receipts by Dec. 24. And it’s encouraging shoppers who don’t win instantly (one prize per store is being awarded each day) to submit their receipts via Instagram or Twitter with an #InstaDream hashtag, to qualify for a $100 gift card.

Walmart, meanwhile, is increasing its promotional pressure, lowering prices on popular toys, electronics, apparel, table games and other products during what it’s calling the Christmas Countdown Savings Event. And on Dec. 15, it says it will get its largest shipment of PlayStation 4.

“When we reported our record-breaking Black Friday results, we said we weren’t done yet, and we meant it,” Duncan Mac Naughton, the Bentonville, Ark.-based retailer’s CMO, says in its release. “As our customers count down the final days until Christmas, we remain focused on offering them great prices.”

It says it is also offering further cuts on more than 300 in-demand items at Walmart.com, in a sale event scheduled for Dec. 16.