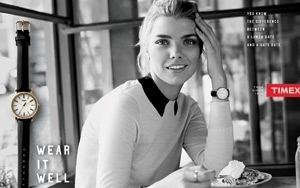 Timex is launching a multimillion-dollar ad campaign, focusing on American heritage with a spotlight on its classic-style watches. The company, celebrating its 160th anniversary, isn't bringing back its famous 1950s tag, “Takes a lickin’ and keeps on tickin’,” but it is asserting that a Timex has cachet, and if you're going to wear it, "Wear it Well."

The effort acknowledges that watches aren't popular merely as timekeeping devices, since you can get the time on any device now, including various appliances -- but that watches are a personal statement of style and even worldview. People who wear a Timex are "unpretentious, optimistic, genuine and self-assured, and ... they are people of character," per a company statement. Timex competes in the mass-market channels, selling watches that start at around $40 and go up to $300, with analog watches the dominant style outside the sport category.

The campaign, via Cambridge, Mass.-based Toth + Co., is centered on a series of black-and-white photographs that provide insights into the character of the people who wear Timex watches. Various executions of the ads will appear in print, online and outdoor media throughout the world.

Michele Szynal, director of marketing communications at the Middlebury, Conn.-based company, tells Marketing Daily that while the effort is still being worked out, "our campaign will live primarily in print and online." She says that digital and social media are a big part of of the communications efforts. "We’re talking to a new consumer; consumers who may not have considered wearing one of our watches before. We need to talk to them where and how they communicate -- and for the most part that’s in the social and digital world."

It has been at least a decade since the company committed to a campaign of this scope, per Szynal. "Over the years, we’ve had new taglines or advertising creative.  But this is the first time in a long time that we’re introducing a 'new' Timex."

The campaign, in the works for about two years, began with a consumer study to determine how people felt about wearing a watch. Szynal says the study took a measure of consumer opinion about things like whether smartphones made watch-wearing obsolete, and how often people actually purchased watches. "We found out that people still wore watches, that they felt a close attachment to them (they sit on your wrist, next to your pulse) and that they wore them not only to tell time, but importantly, to make a statement about who they are."

She says Timex has strong brand equity around the world. "Consumers -- especially in the U.S. -- think of Timex as classic, timeless and having products that never go out of style. The new 'Wear it Well' campaign reinforces those feelings."