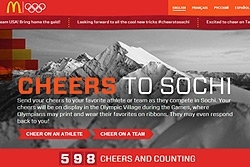 McDonald's, which will mark its 10th consecutive year as the Olympics' official restaurant at the Winter Olympics, has launched a social campaign, dubbed #CheersToSochi, encouraging fans worldwide to send personalized greetings to their favorite athletes and teams.

Fans can visit www.cheerstosochi.com or tweet using the hashtag #CheersToSochi to send messages of good luck and inspiration directly to their favorite athletes and teams.

The messages will be on display in the Athletes’ Village in Sochi, where athletes will be able to view them and print the messages on ribbons to wear around their wrists. Some athletes may tweet their appreciation back to fans.

McDonald's is also promoting the campaign with videos explaining how it works. One features athletes encouraging fans to tweet messages; the other, geared to kids, uses illustrations and mentions only the Web site message-sending option.

Other McDonald's Olympics-related initiatives include donating a new playground, designed to accommodate all children, including those with disabilities, to the city of Sochi.

In a "Champions of Play" program, McDonald's will bring together children from Russia and other countries around the world to attend Olympic events, meet athletes and get behind-the-scenes tours of select Olympic venues. Many of the kids selected will act as correspondents while at the games, sending reports on their experiences back to their hometown presses.

McDonald's is building two, 24-hour restaurants in the Athlete's Village and Main Media Center, which will feature a McCafé menu. It will also have five permanent restaurants in Sochi and the surrounding region. Several menu items will be introduced in Russia for the first time, including grilled chicken, frappes and smoothies.

On-site restaurants will be staffed during the games by nearly 350 Russian Olympic Champion Crew members from across the country -- staff selected based on having been named Employees of the Month or McDonald's All Stars at their hometown restaurants.

McDonald's launched in Russia in 1990, and now has more than 380 restaurants in 112 cities in the country that employ nearly 37,000 people and serve more than a million customers a day.