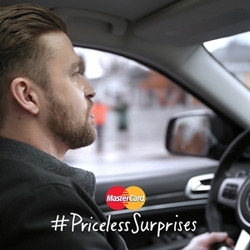 Having spent the past 17 years celebrating the better things in life that can’t be bought (but can be had by buying things), MasterCard is evolving its brand platform to promote not just enabling priceless experiences, but to create “Priceless Surprises.”

The “Priceless Surprises” global marketing initiative encourages people to use their MasterCard credit and debit cards with incentives such as offering music-related surprises such as free headphones or music downloads. The promotion also includes grand prizes including trips to see pop star Justin Timberlake anywhere in the world and — by using the hashtag #PricelessSurprises on Twitter — a chance to have a one-of-a-kind experience with Timberlake.

MasterCard chief marketing officer Raja Rajamannar described the “Priceless Surprises” campaign as an evolution of the brand’s longtime positioning of noting that while many things come with a price tag, the experiences they create are priceless.

About five years ago, the brand expanded its platform to promote “priceless moments,” which included experiences and deals for MasterCard holders in select cities. While those programs will continue, the Priceless Surprises effort will be more inclusive for more customers around the world, and will move the brand into bringing “‘Priceless’ in new and unexpected ways,” Rajamannar says.

The “Priceless Surprises” campaign launched during the Grammy Awards on Sunday night with a television commercial that featured pop star Justin Timberlake surprising a fan, Avena Savage, by showing up unannounced on her doorstep. In the spot, Savage plays Timberlake one of her songs, while he adds a beatbox beat. At the end of the commercial, he declares himself a fan of her.

“He likes to surprise his fans. That’s a part of his celebrity and who he is,” Rajamannar tells Marketing Daily. “Unlike in a typical ad, there was no script and we let it play out by itself. It was a beautiful spontaneous reaction.”