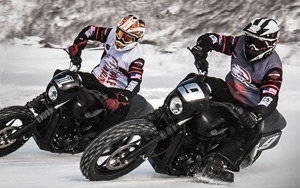 It's the first new Harley-Davidson platform in 13 years. It's designed for the city. And it’s the first H-D bike with three-digit  displacement in a while. Maybe a long while.

Part of H-D's Dark Custom line of bikes, the new Street 500 and 750 motorcycles become the de facto entry bikes for the brand. These are much-needed machines in the portfolio, since new riders can easily be intimidated by numbers. Both the ones after the dollar sign and the ones before the "cc." Heretofore, the lowest displacement was about 1,200 cc's on the Sportster platform.

"It's a new category of motorcycle for us," says Dino Bernacchi, head of marketing communications at the Milwaukee, Wisc.-based company, of the new Street bikes. "It fits right into Dark Custom as a smaller, new, stripped-down bike. It's more approachable from a size and stature perspective."

The company -- which tends to go to its avid fan base via social media to get both ideas and insights -- just showcased the new motorcycle on ice, of all places, via sponsorship of X Games Aspen, broadcast on ESPN. Rather than straight ads, the company used the opportunity to promote the bike with a social campaign advocating that motorcycle ice-racing (a real sport) be included in the Games. The effort includes a short film in which a pair of Street 750's geared up for ice careen around a frozen lake doing upwards of 100mph.

Bernacchi tells Marketing Daily that X Games as well as a brand new campaign launching this weekend are all about reaching a new, more adventurous motorcycling prospect. "I'd venture to say we have been in extreme sports since the early 1900s with flat-track racing. When you think about it, and what kids do today, this bike is perfectly poised. It's all authentic to the brand."

The new program is a sponsorship and product-integration with Disney/Marvel Studios' “Captain America: The Winter Soldier.” Bernacchi says Harley will launch a cross-promotional campaign starting this weekend. The studio, it is confirmed, will run an ad for the movie in the Super Bowl. The campaign is timed with that.

"We have been part of 'Captain America' since the early ‘40s," says Bernacchi. "From the first, he rode a Harley in the comic book." He notes the the company was involved in the 'Captain America II,' "so, when they came with [the third installment] movie, we said, 'We're in.'" He tells Marketing Daily that the new Street 750 will be integrated in the film as well.

Bernacchi says the activation includes a program around a Harley-Davidson-produced, thematically aligned short film that will star a consumer who wins an online promotional competition. Essentially, consumers can take an online "agent aptitude" test, then choose a bike, "and," he says, "see if you can cut it as an agent." They then learn to ride the motorcycle through H-D's training program before acting and riding in the film.

Bernacchi says H-D has, for a number of years, been a major sponsor of UFC (Ultimate Fighting Championship). "We are really embedded in it; there are fighters that have become riders."

As for X Games, Bernacchi says the company will also be involved in the next one in Austin, Tex. One can guess we'll see a petition for flat-track racing. Will it and the ice version become part of the games? Maybe it doesn't matter so much. "It went on our social site and ESPN's and became our number-one ever Instagram we have ever launched. We saw a 400% increase in engagement."