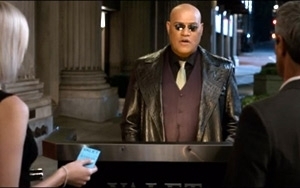 Should you take the red pill or the blue pill? Unless you were born 10 years ago, or 70 years ago maybe, you know what that refers to. Unless you've been in a salt mine with the spent fuel rods you probably also know that Kia is tapping the Matrix theme and its star, Laurence Fishburne, to promote the forthcoming Kia K900 luxury car. Just the fact that Kia is making a luxury car and that you should consider it against, say, an E-Class, or 5-Series, kind of requires a rethink of luxury.

We won't describe the spot, via AOR LA-based DavidandGoliath; you can watch it here. Michael Sprague, Kia Motor America's head of marketing and communications (who actually bears a passing resemblance to Agent Smith), explains to Marketing Daily that the metaphor is that one can go back to the old, safe way of viewing luxury, or see the truth -- that a nameplate isn't luxury, just a mirage. "We can use that story because tradition and heritage don't define luxury: design, technology and quality do. This is what new luxury is," he says.

It's not the first entry to the aspirational end of the market. The Irvine, Calif.-based automaker entered the upper reaches of the mass market with Cadenza, directed to an audience of 45- to-50-year-old males and with an average owner age between 36 and 42. That effort had a high school class reunion theme. For the new spot, says Sprague, the target customer grew up with “The Matrix,” which premiered some 15 years ago. “They can relate.”

The K900 is a different proposition, starting at $50,000 for the V6 and and around $56,000 for the V8 (the vehicle on which the campaign is focused.) "We have launched 16 new vehicles over the last 5 years; we see beginning customers want fully-loaded vehicles; they want to be the first to own it," Sprague says.

"We are seeing conquest buyers from general market brands and luxury brands. Some people are moving down again because we offer great product and great value. We are also seeing move-ups within the family. Customers who may own Optima or Cadenza are looking for something that makes a bigger statement. So it's a huge opportunity in terms of the luxury space. As luxury brands are moving down, we see a great opportunity to move up into their space."

He adds that the car also serves as a flagship for the brand and proxy for quality and aspirational value. "If we can deliver this on luxury vehicles, imagine what we can do on other cars." Another category the company is mulling, and the one that supplies another kind of halo vehicle, is the sports car area. Chief designer Peter Schreyer helped develop a GT concept that Kia showed in Detroit this year, the Kia GT4 Stinger, a two-plus-two sports car. The automaker, which sells a hybrid version of its Optima sedan, announced it will field an electric-powertrain version of its Soul compact crossover, it's second-highest seller last year.

Sprague says the marketing program for the K900 includes lots of cable, sports, business news, cultural and exploration books like National Geographic and Discovery, and The Food Network. "We also have a full complement of magazine, digital, and in-cinema."

The cinema strategy eschews national cinema for buys in Spotlight Theatre cinema houses in 13 markets that over-index for luxury vehicles. "These are art-house cinemas frequented by people looking for alternatives to mainstream,” says Sprague. “They have seen the Academy Award-winning films, but they also like films and documentaries."

He says that after the Super Bowl, new spots for the K900 will go into rotation. These will be both cut-down versions of the Super Bowl :60 and ones that, per Sprague, use Fishburne's “Matrix” character in other ways.  And Kia will be an official auto sponsor of the FIFA World Cup this year around the "Challenge the Luxury You Know" theme.