Must Super Bowl Ads Be Viral? 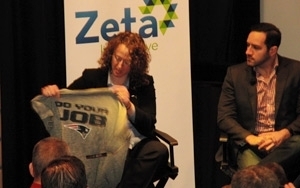 Advertising is intrinsically tied to the Super Bowl now more than ever, with brands spending $4 million for a 30-second commercial. In fact, many viewers consider the first Sunday in February an advertising extravaganza, with some football plays mixed in.

Yet a growing number of advertising industry executives are expressing concern over the beast that has been created, according to panelists discussing the impact of Super Bowl advertising at an event hosted by data agency Zeta Interactive today in New York City.

"The key difference between Super Bowl advertising today versus 30 years ago is the pre-release of an ad," said David Sable, Global CEO, Young & Rubicam (Y&R). "It changed what got us talking. Viral is not new, but instead of [ads about] inspiration and insight, it's become G-M-O-O-T—Give Me One Of Those.”

“Clients say 'Make me a viral. Give me something that will be shared.'” Sable added. “They just want to say 'I got 10 million views on YouTube.'" This attitude results in ads that are memorably forgetful, says Sable. "Bottom line -- we know a cat pissing on shoes is funny and people will send it out, but no one" is buying products off that ad.

Some argue that the most successful Super Bowl campaigns challenge conventional wisdom. Most of today's ads use celebrities, babies, and animals. But standing apart from the crowd provides better impact. Apple's 1984 ad, for instance, did not show a product, but rather created the expectation that something amazing was going to happen, according to John Sculley, former Apple CEO.

"Steve Jobs' words were to build a campaign that is going to stop the world," said Sculley, who helped develop the iconic 1984 ad. "He loved the idea [of promoting] an experience and a lifestyle. It wasn't a computer in the sense of technology. It was an insanely great tool to change the world." Sculley adds that 1984's concept came from a Newsweek cover story that claimed 'IBM has won' the computer war with Apple.

Yet, while the 1984 ad may have been embraced favorably by viewers, it wasn't immediately accepted by Apple's Board of Directors, who greeted the clip with "dead silence." Sculley and his team were then ordered to sell Apple's two one-minute Super Bowl ad slots. Thankfully, Sculley was only able to sell one spot after trying not very hard to sell the second one.

Ultimately, Apple spent $1 million to air that ad and over the next month and a half, Apple garnered the equivalent of $45 million in free commercial exposures, per Sculley.

And there are ways for marketers to command great attention amidst all the Super Bowl hoopla without actually buying an ad in the game. Last year Y&R client Dell launched a new product around the time of the Super Bowl. Traditionally, company executives would have paid for a high-profile ad during the game to jumpstart the media blitz. Instead, Y&R "did a little experiment," says Sable. Shortly before the game, Dell and Y&R tweeted a link to an advertisement to a select group of influencers. Soon the ad went viral and joined all of the other paid Super Bowl ads in pre-release hype. No one noticed that Dell wasn't a Super Bowl advertiser.

Ultimately, without "a penny paid in media, the clip received six million views and was voted as one of the top pre-released ads," says Sable. Still, he adds that this hype did not necessarily directly influence sales.

Technology and the rise of social media have undeniably altered Super Bowl advertisements, although there are some growing pains in using these tools. Analytics only help when they are tied to the client's main objective, the panelists agreed. Otherwise they are distractions. "We forget the basic role of marketing and what makes us excited is the feeling," says Hooman Radfar, Co-founder, AddThis. "There's a divergent view in the industry with the creative people on one side and then there's a separate crew of the math men. The future is in the marriage of the two."

Ultimately, effective Super Bowl advertisements do more than elicit a laugh. "The key word is engagement," said Sculley. "In the 1984 ad, we said we wanted to get as big an audience as possible. Now we want to be finely focused on getting that one customer."