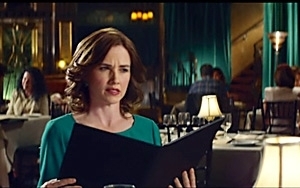 Everyone has had that nagging feeling that they’ve forgotten to lock the door when they’ve gone for a night out. Security company ADT addresses those feelings in a new campaign that touts everyday security over life’s worst moments.

“In the past, we had focused on -- from a consumer perspective --  what I would call ‘their worst day,’” Tony Wells, chief marketing officer of ADT, tells Marketing Daily. “The research suggests that consumer interest in home automation is expanding and we wanted to show how we were addressing that.”

The new campaign, dubbed “In my mind’s eye,” from Arnold Worldwide, began this week with a television commercial that shows a couple out to dinner when the woman wonders aloud whether she locked the door. Her counterpart begins envisioning burglars creeping through the restaurant with their prized possessions (including their fish) before using the ADT Pulse app on his phone to ensure the doors are locked, offering him peace of mind and an ability to focus on his night out.

The ad is “a bridge” between the company’s previous marketing efforts, which focused on the aftermath of an event and the actual value of ADT protection, to one that focuses on the intangible value that peace of mind can bring, Wells says.

The television commercials, which will also address leaving electric items turned on in further iterations, will be supported with radio, direct, digital and social media executions later this month.

The campaign comes as the home security space expands with new offerings from cable and telecommunications companies, which are selling not only home security, but also home automation. The shift in tone is meant to show how the 139-year-old company is keeping pace, Wells says.

“There are a lot of new entrants into the space. We think we have an unbelievable product and heritage in the space,” Wells says. “Security is at the core of our brand, but we also have these new devices that are compelling reasons [for choosing] ADT.”