Interpublic Report: It's Time To Shift From Nielsen Ratings To 'Impressions-Based' Trading 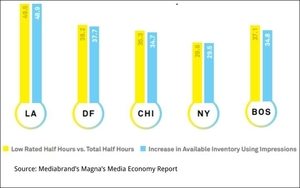 Media-buying biggie Interpublic's Mediabrands is making a case for the local TV advertising marketplace to shift from conventional TV ratings to “impressions-based trading.” The recommendation -- which is part of a new report on the role data is playing in reshaping media-buying, especially programmatic trading -- comes as the local TV audience measurement marketplace is in disarray, with the broadcast industry balking at Nielsen's efforts to introduce a new “hybrid” measurement format that would, among other things, integrate broadband-only households into Nielsen's local TV audience panels.

“Local television inventory has long been traded on ratings, but fragmentation has reduced the average rating size, rendering them unstable and unpredictable,” Mediabrands' Magna unit asserts in the “local TV trading” section of its latest Media Economy Report.

The shift to “impressions-based trading,” Magna argues, would:

* "Create additional supply by turning tiny, fickle percentages into hard numbers that can be

* "Feed into new, more efficient buying processes for both broadcast and cable inventory.”

While Mediabrands has never talked publicly about its TV audience-buying tactics, it is known to be working with some of the biggest early developers of programmatic TV audience supply. The local TV trading section of the report includes graphics outlining the infrastructure of two market-makers: Visible World and Wideorbit, but does not explicitly endorse them.

The implication could not come at a worse time for Nielsen, which is embroiled in a tug-of-war with the National Association of Broadcasters and its Committee on Local Television Audience Measurement over Nielsen's plans to roll out a new local TV ratings system without first testing its impact on the marketplace. While local TV ratings, especially in Nielsen’s smaller, non-metered markets, have long been the bane of Madison Avenue and TV industry researchers, and Nielsen says the new methods are necessary to improve the representation of local TV viewers. The NAB has called on Nielsen to delay the rollout until it can be tested, but Nielsen so far has demurred. The stalemate could encourage some local broadcasters to look at alternatives, especially the kind of census-based data from digital set-top TV devices that could be utilized in the kind of impressions-based trading Magna is endorsing.

Over the past couple of years, a number of smaller broadcast groups have signed on to Nielsen rival Rentrak, which utilizes set-top data, and recently one of the biggest, CBS, also signed a contract with Rentrak. CBS also recently signed a new contract with Nielsen covering the new local hybrid TV ratings service, so it seems to be hedging all its bets.

“Moving from ratings to impressions in local TV trading will not only create additional supply,” concludes Magna in its report, “but enable more automated transaction processes.”

While that last point might be an impediment for local TV broadcasters and cable operators to embrace a move that would boost supply, the move to more automation is essential for agencies, because they can no longer staff the kind of local media-buying organizations necessary to buy local TV manually. It's part of the reason Interpublic has set a goal of automating most of its media-buying within the next two years.