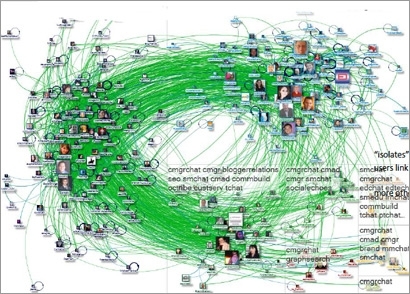 Twitter has become a linchpin of brands’ social media marketing efforts, especially when it comes to capitalizing on up-to-the-minute trends and big events like the Super Bowl and awards shows. But while the microblogging service can generate large crowds around brands and celebrities, it doesn’t necessarily spark conversation among them.

That's among the key findings in a new study by the Pew Research Center and Social Media Research Foundation that identified six different styles of conversation and community on Twitter based on people’s networks, the subjects and sources of interest to them and how they interact.

Rather than rely on surveys or focus groups, researchers analyzed thousands of interactions on Twitter -- tweets, retweets, replies -- and the social networks of users through an open-source tool called NodeXL that plugs into Excel spreadsheets. This allowed them to create visualizations that map the different social patterns that emerged among users.

Among the six and most directly relevant to advertisers is what the report calls “brand clusters” that form around prominent products, services or celebrities. Participants in these groups tend to focus on a topic, but not necessarily connect with each other.

“Well-known brands and other popular subjects can attract large fragmented Twitter populations who Tweet about it but not to each other. The larger the population talking about a brand, the less likely it is that people are connected to one another,” states the report.

As an example, Pew looked at the brand cluster network around Apple -- the world’s most valuable brand per Interbrand -- on Twitter. It found that most users don’t follow, reply to or mention any other user who also tweeted about Apple. The Apple network reflected another aspect of brand clusters, which is to attract some small interconnected groups. The study found similar patterns in examining Cisco on Twitter.

In contrast to brand clusters are relatively cohesive “community clusters,” created around world events. These networks “look like bazaars which host multiple centers of activity. Global news stories often attract coverage from many news outlets, each with its own following, That creates a collection of medium-sized groups,” the study noted.

There’s also the “broadcast network,” a pattern in which commentary around breaking news and the programming of major media outlets and pundits forms a distinctive hub and spoke structure where many people repeat what these outlets tweet. Users in this category are typically only connected to the hub and not each other.

This leads Pew researchers to conclude that “there are still powerful agenda setters and conversation starters in the new social media world.” Organizations and personalities with loyal followings can still have an impact on the conversation.

The study also highlights Twitter’s role as customer relations management (CRM) tool for companies in the form of “support networks” that handled complaints for large businesses. This involves a hub and spoke structure, in which the hub replies to many otherwise disconnected users. These networks, in turn, become important benchmarks for evaluating the performance of businesses and other groups.

The Pew Research Center estimates that Twitter users make up only 18% of U.S. Internet users and 14% of the overall adult population. “Still, the structure of these Twitter conversations says something meaningful about how engaged users discuss topics, find each other, and share information,” according to the nonprofit group