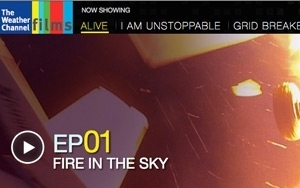 Forget about upfronts or “NewFronts.” Doing its part to break down media barriers, The Weather Company combined its TV and digital sales presentations on Tuesday morning in what it called an “AllFront.”

During the event, Weather Co. executives discussed their enthusiasm for native ad integrations and the launch of cross-screen content, like its new flagship morning series, “AMHQ with Sam Champion.”

Redefining its ad strategy, Weather Co. only plans to release native ad units this year, said Alex Linde, senior vice president of monetization for The Weather Co. “They integrate better [with editorial content] … and consumers vastly prefer them,” Linde told Media Daily News. “They don’t want to be stuck in a banner ghetto."

This year, Linde said he expected to release five native units, two of which were unveiled on Tuesday. One unit is a branded background that will span all media channels and adjust to viewers’ local weather patterns.

Another -- set to debut in April when Weather’s mobile app relaunches with a vertical scrolling feature -- will sprinkle ads in with editorial. Linde described the aggressive native push as “a little bit of an experiment,” but the shift is hardly unprecedented.

Boasting their ability to exploit weather data across screens, Weather Co. heads went so far as to compare their market position to that of Google’s role in search, and Facebook’s place in social marketing. Indeed, Jeremy Steinberg, senior vice president, digital ad sales for The Weather Co., said the company gave brands nothing short of a “weather strategy.”

The network’s numbers are impressive, particularly on the digital side. Steinberg said video streams across mobile platforms were up 322% from 2012 through 2013, while The Weather Channel mobile has racked up about 130 million app downloads. Through an on-demand application programming interface, Weather Co. said its Weather FX platform can now help marketers reach 173 million monthly consumers across multiple platforms.

On the content side, Weather Co. announced “prime time” programming produced in concert with Weather’s digital platform for an umbrella series called “Will to Live.” Exploring extreme stories of survival, "Will to Live" is a cross-platform, co-produced TV series, with two out of five hours of TV coming from Weather’s digital video team.

Whatever you call them, digital sales presentations are expected to rake in big brand dollars this year.

Last year, one in three media buyers who attended a Digital NewFront event said it positively impacted their plans for digital video ad buys, the Interactive Advertising Bureau found. Some 78% of buy-siders reported walking away from the weeklong event with at least one new opportunity for their company or a client, while 64% of ad buyers with responsibility for multiple media platforms said they anticipated their “TV plus Digital Video” buys to increase over the next year.

Capturing a general sense of optimism about the future of digital media planning, 70% of agency and marketer attendees said it was likely that buyers would shift more budgets away from TV and into digital video over the course of the next year.

Along with Sam Champion’s morning show, which is expected to debut next Monday, Weather Co. expects to unveil “Tornado Alley,” which aspires to be as educational as entertaining on the topic of tornados -- in late April.

Following the Discovery Channel’s success with “Deadliest Catch,” Weather Co. also has high hopes for “Catching Hell” -- a “natural drama” about some brave commercial spear-fishermen expected to debut on June 1.

Before the end of the year, Weather Co. plans to roll out “Now What?” which will be driven by weather-related emergencies and how people respond to them, and the spookier side of Mother Nature with “Wicked in the Weather.”

Plus, Weather Co. has renewed several series, including “Strangest Weather on Earth,” “Why Planes Crash,” gold-mining saga “Prospectors,” and “Coast Guard Alaska.” Each new season is expected to debut in the fourth quarter of the year.

Last year, Weather.com created the “Weather Films” umbrella of digital series. This year, Weather Films will focus on investigative documentaries about fracking, homelessness in some of the country’s coldest cities, and climate change deniers.