Squerb Wants To Kick 'Likes' To The Curb, But Twitter Trends Has It Beat

RTM Daily has been on a bit of a “user-generated” trend this week, and it’s not stopping yet.

I just learned about Squerb, a company that creates user-driven opinion graphs. It will be launching a new “sentiment engine” at SXSW because the company doesn’t think Facebook “Likes” or clicks “allow for any meaningful digital self-expression,” a representative said.

Instead, Squerb wants users to “squerb” their opinions (yes, they are creating a verb for this). Think of it as a mix between Yelp, Facebook likes, Twitter trends, Pinterest re-pins, and the comments section on Amazon.

“Most sites rely on simple heuristics like thumbs-up, ‘like’ or 1-5 stars,” stated Squerb founder and CEO Chris Biscoe. He added that while those tools offer a quick 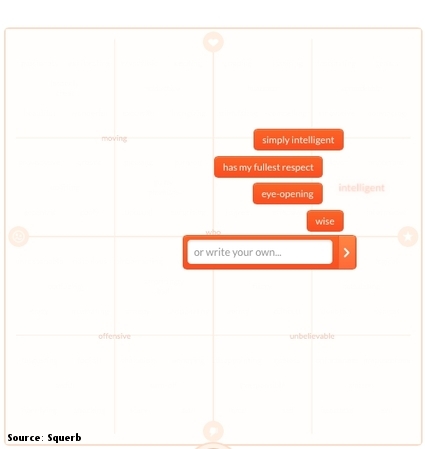 overview of opinion, they don’t offer much in the way of meaningful data.

I squirm at the thought of squerbing because, really, the last thing Internet users need is another medium to express feelings. I can see where Squerb sees an opportunity, though, because I agree that rating everything online from 1-5 doesn’t give the most accurate read on user sentiment.

Each time a user “squerbs,” the opinion graph is updated in real-time. There are some obvious tie-ins to real-time marketing there, but I still think Twitter has the bases covered in that department.

Squerb claims it differs from trends because, for example, it doesn’t just have users rate a movie as a whole -- it also has them rate subcategories, like acting. The thing is, Twitter trends can pick up those subcategories.

The company says the real play is for brand marketers, who will have a user-generated “Big Data” source on nothing but opinions. I can see that. I think that even though the opinion graphs are updated in real-time, the platform will end up being more useful for long-term branding efforts than real-time marketing attempts.

That's not to say there's nothing here for real-time marketers. The platform will only be as useful as consumers make it, but the data provided will not need to be parsed. It eliminates the need to figure out what the data is telling you -- the consumers will do that for you. In theory, this would allow marketers to make faster decisions.

With regard to data collection and "data mining," Squerb is cutting out the need for automation. That's not quite as sexy as "machine learning algorithms," but it could be more effective.