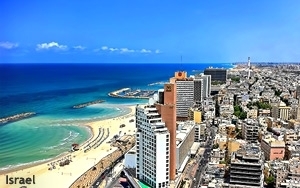 Older Americans have a love/hate relationship with Israel, but at least they have a relationship. Younger people? Not so much. They are three or four generations removed from the events that led to its founding, and if they can't name the founding fathers of our country, it's unlikely they know much of anything about that sliver of territory on the eastern end of the Mediterranean.

An American nonprofit called reThink Israel is trying to change that with a content site and digital campaign about Israeli lifestyle, technology, economy, landmarks and culture. The organization hired youth-focused Dailybreak Media, an online game site that claims to get 25 million consumers and has run programs for Procter & Gamble, Dunkin’ Donuts, Puma, Halls and Chevrolet, to show Millennials another side of the country.

It’s not a tourism play. The content on reThink’s site tends to be on things like NBA star Amar'e Stoudemire’s connection to Israel and his having applied to become an Israeli citizen; blindness prevention technology, solar technology, industrial design and architecture developed there; Gay Day in Israel; and the new Miss Israel, who is Ethiopian.

The organization is running “Challenge” games on Dailybreak.com designed to test visitors’ knowledge about different aspects of Israel's accomplishments. A user-generated content component lets people upload photos of themselves aligned with each campaign theme -- such as riding a bike to promote healthy living and clean transportation -- with the best photo submission eligible for prizes.

Jon Leven, COO of reThink Israel, says 70% of Americans don't know, care, or have any connection to Israel, mostly because most of the discussion is political and religious. "We wanted to promote diversity, ingenuity, humanitarianism, and our shared values with Americans," he says. "The end game is to create affinity for Israel. In our research, when we asked people what came to mind when we said 'Israel,' we heard three words: religion and conflict were two. But the most common word was 'nothing.' So we think there's a great story to tell that just hasn't been told very well."

Each phase of the reThink Israel Challenge game series has a different theme featuring an aspect of Israeli life. The current phase of the effort, which runs at least through the year, focuses on innovation; future versions will highlight food and fashion, among other topics. The group says Dailybreak will oversee upcoming campaigns based on the results achieved in the initial phases.

Leven says this kind of paid media is more effective because of the level of engagement the organization is seeing. "We are getting a lot of Millennials to spend three minutes learning about Israel. Their audience is huge, and we are taking small chunks at a time. We have gotten 100,000 views and we are getting great viral response because people who play also share within their social networks."