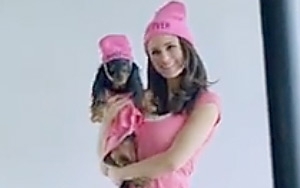 Talk about going to the dogs. Teen retailer American Eagle Outfitters is introducing what it claims is the first-ever line of matching dog-and-people clothing, and hopes the social media campaign for canine chic will raise $100,000 for the American Society for the Prevention of Cruelty to Animals.

Called American Beagle Outfitters, the launch includes a hilarious Dogumentary -- “So imagine a world where you walk into the mall and there’s just one store, and all they have for you is Halloween costumes. That’s what she’s dealing with,” deadpans one of the firm’s stylists, holding a forlorn and unfashionably naked pooch. The line includes “slimming doggy jeggings” and “fur-friendly bikinis.” And by using a promotional code, shoppers can buy the clothes online before they hit its 1,000-plus stores, triggering both personal savings and a $1 contribution to the ASPCA.

But the real fun is reserved for social media, with shoppers encouraged to post pet photos on Instagram and Twitter. Aspiring furshionistas have a shot at appearing in its next campaign, which means Boots, Scout or Spike could be heading down the catwalk in the near future. The Pittsburgh-based retailer has also created e-cards of dogs modeling the clothes, to encourage sharing.

Shoppers can choose among looks just for small, medium or large dogs, all coordinated with the company’s spring human collection. "Your dog's style is another form of expressing your own, and we are thrilled to bring American Eagle fashionable looks to our pups with the debut of American Beagle Outfitters," says the retailer’s style director, Preston Konrad, in its release. "The collection promises to embody the optimistic, all-American spirit of our brand."

The American Pet Products Association says Americans laid out a record $55.7 billion on their pets in 2013, and forecasts that spending will hit $58.5 billion this year. Of that, some $22.6 billion is expected to be spent on food; $13.7 billion on supplies, including OTC medicine; $15.3 billion on vet care; $2.2 billion on live animals, and $4.7 billion on services, including boarding and grooming. And while the  spokesperson for the organization says it doesn’t have a figure for canine wardrobe budgets, she says a 2012 survey found that 30% of pet owners purchased dog clothing. And last year, the National Retail Federation reported that some 22 million Americans indeed dressed their pets in costume, spending some $330 million.