That Giant Sucking Sound Was The Olympics, Tapped Madison Avenue Out 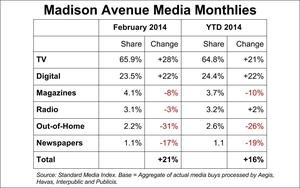 In what may be the first empirical view of the so-called “Olympic effect,” a disproportionate share of Madison Avenue's media spending was allocated to NBC's coverage of the Sochi Olympic Games, causing the shares of most other media to tumble during February and the first two months of 2014. The data, which is based on the aggregate spending of the actual media buys processed by four of the major agency holding companies, reveals that while the Olympics had some incremental effect -- boosting total Madison Avenue spending by 21% in February and 16% year-to-date -- it also sucked the growth out of all other media with the exception of “digital,” which continues to grow at impressive organic rates.

While there is likely some incremental boost in the digital spending due to NBC's “multi-screen” sales of its Olympics coverage, overall digital growth was even at 22% in February and year-to-date.

That wasn't the case for all other media -- including magazines, radio, out-of-home and newspapers -- which were all in the red during February, although radio is managing some year-to-date growth.

Out-of-home, in particular, appears to be eroding at a precipitous rate -- declining 31% in February and 26% year-to-date -- rates of decline that cannot be explained by the Olympic effect. SMI analysts speculated that the decline in out-of-home appears to be due to budgets shifting into digital spending, but could not confirm that until more data becomes available.

Ambiguity is not the case for television -- especially broadcast network TV, which benefited not just from the incremental effect of the Winter Olympic Games, but also from Fox's coverage of the Super Bowl, sending the Big 4 broadcast networks' total volume up 44%, and its share of Madison Avenue's budget to nearly 30% in February.