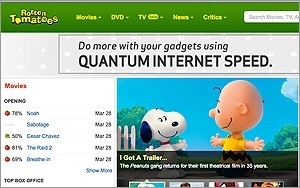 Although social media continues to be a growing force when it comes to moviegoing, movie marketing remains heavily dependent on reviews. Eight out of 10 moviegoers still refer to movie reviews at least some of the time when they’re considering what films to see, according to Nielsen.

Digital media is a big part of their decision. For example, the Nielsen research for 2013 reveals that 41% of millennials said they check the average critic rating on Web sites, such as Rotten Tomatoes and IMDb.

“As movie studios plan their marketing budgets for next year’s blockbuster movies, they should consider that most moviegoers are using social media to get their information,” said Kathy Benjamin, SVP, Nielsen National Research Group, in a release.

“Taking advantage of the potential that social networks provide will be important to connect with their audiences.”