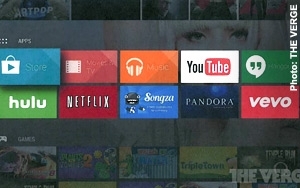 Apparently the industry believes that the best way to make TV simpler and more fluid is to clutter the field with alternatives. Google is going above and beyond the call of duty in planning a set-top box that not only takes on Apple TV, Roku, cable/satellite boxes and connected TVs, but even its own Chromecast device that it is pushing everywhere.

According to a document “leak” to The Verge that is just too well timed and detailed to be considered anything but strategic, Google is going to release an “Android TV” box that is not unlike the current competition. Amazon's well-covered Fire TV release was just a bit too much for Google to take, I guess. The report says app developers are being encouraged to develop specifically for the platform -- but with consistent interfaces that will make the experience more fluid. The leaked images suggest all the usual suspects in the streaming and video arena will be here, including Netflix, Hulu, Pandora, and Vevo. But there will also be games on board. And of course there will be a voice interface.

I gather from the story that Google will try to leverage its deep user knowledge and cross-device relationship in order to stand out here. Recommendations and push will be signature features of the device. Android TV will be offering up suggested material from the apps rather than just letting the user rely on launching and exploring each. The design will also encourage the user to pick up and resume experiences that are started on a smartphone or tablet.

I have to wonder if Google is going to begin applying to Android TV the app indexing it is starting to offer on the device platform. In recent Android releases, apps now can have their content indexed so that a top-line search from the operating system can find and link directly to results in an app. This combination of deep linking and cross-app search addresses one of the central weaknesses of an app-based content ecosystem -- silos of content. Being able to surface from all installed apps both recommendations and search results for entertainment choices would be a genuinely welcome development.

Still, I have to wonder why Google is confusing the market with two set-top solutions, Android TV and Chromecast. The new project seems determined to fix the folly of the first generations of Google TV. But I thought that has been addressed by Chromecast. Of course, the set-top box approach allows for installed apps, and probably a more traditional TV-like experience. Chromecast requires use of a secondary device. But how does the company parse between the two for consumers? Of course there will always be some consumers who will prefer their TV experiences more firmly planted on the TV device, and others will be comfortable with the device-based alternative. But it will be a tough job distinguishing the models for consumers, I suspect.