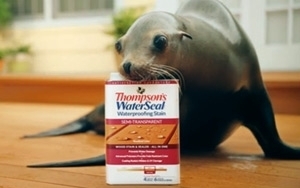 It might seem like an obvious creative direction, but a TV spot breaking for Thompson's Water Seal is the first time the home improvement product company has actually featured a live seal in its advertising.

The 15-second TV spot debuts April 14 and will run will on network TV and national cable as well as digital. A print component is also planned. Thompson’s was last on TV in September.

Brushfire zeroed in on the iconic Thompson’s Water Seal logo to help launch the company’s  new line of waterproofing stains. For 85 years, the company logo has featured a seal called Addis, named after the company founder.

The campaign cleverly brings Addis to life, while demonstrating the beauty and exceptional waterproofing benefits of the new product line, which will be sold exclusively at The Home Depot.

Brushfire has created many interesting campaigns for Thompson’s WaterSeal for over 11 years, including a memorable ad shot at Niagara Falls. When it came time for the launch of this expanded line of waterproofing stains, which simplify deck care, the Brushfire creative team felt it was important to further impress the brand’s identity in the minds of consumers.

“We’re really proud of the new line and its many innovations, from the packaging to the formula, and we’re looking forward to a strong launch,” says Mike Kozlowski, Thompson’s director of marketing, in a release. “The new commercial not only does a great job of conveying the product benefits, it actually brings the brand personality to life and forges a connection with the consumer.”