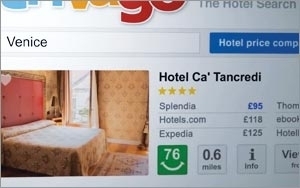 Phoenix Marketing International will release findings this week from an online travel audit analyzing consumer sentiment about the most popular travel industry ads on TV.

Josh Berger, research director at Phoenix Marketing International, gave MediaDailyNews a first look at results. He said researchers also tested ads from American Airlines, Southwest, Delta, and United, as well as travel destinations like Orlando and Texas. "Ads can succeed several ways, whether they engage through a relevant message or empathy," he said. "A straightforward approach as to what makes Trivago different than other search travel sites seems to work for the site."

Business and leisure travelers identified Trivago for its advertisement The Perfect Hotel as the overall top-performing message. More than 55% of leisure and 50% of business travelers said they would recommend the site to others. The newcomer's message tells consumers the site can compare hotel prices from more than 100 Web sites, adjusting the price depending on the budget.

Berger said Google did not rank within the first five sites. Other sites like TripAdvisor and Hotwire maintain a category lead. "We really think that as the survey product gets built up over time, it will give us a better understanding of trends and the growth of Google, as well as sites like Trivago," he said.

Overall, Hotwire took the No. 2 and No. 3 spot among leisure travelers, with its ad From New York to Texas ranking No. 1 with the highest recall at 81%, followed by its Florida to Seattle ad with 79%. Expedia and Priceline rounded out the top five overall spots for leisure travelers, respectively.

Enterprise Rent-A-Car's 50 Million Tree Pledge took the most buzzworthy ad in the category, with 30% of travelers saying they would likely speak positively about the advertisement to others. The ad improves the consumer's impression of the car rental company by tapping into charitable effort. After seeing the ad, 60% of people feel better overall about the company compared to a travel average of 36%.