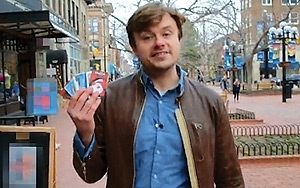 Coinstar, which eliminated the need for coin collectors to have to roll their coins in paper wrappers in order to exchange them, is promoting its latest offering: A kiosk that turns gift cards into cash.

There are several hundred kiosks in those markets as well as several other cities. Locations will continue to expand and consumers can find the closest kiosk here.

It was created by Boulder, Col.-based Grenadier. Media planning and buying is being handled by Grenadier’s partner agency, Barkley, an independent shop based in Kansas City, Mo.

TV spots star David Barton Harris, a member and teacher at the comedy group Upright Citizens Brigade Los Angeles. He is shown trying to spend unwanted gift cards as if they were cash. Merchants look at him quizzically when he presents the cards, which are not for their stores.

The kiosks will exchange gifts cards for cash for an average of 60% to 85% of the gift card value, depending on the card.

Available at select grocery retailers in markets across the U.S., the bright yellow Coinstar Exchange kiosks allow consumers to transform unused or partially used gift cards into cash immediately and accept more than 150 gift cards from a variety of retailers.

“Coinstar Exchange has the potential to access a large untapped market,” Montgomery says in a release. “We believe there is a strong value proposition in providing people with cash for a gift card they may not want.”