Progressive Reaches Out To Millennials With 'Babyman' 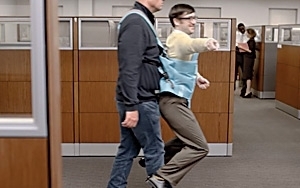 Progressive has sent Flo on a temporary vacation with the introduction of “Babyman,” a campaign that features a man in his 30s that acts like a baby.

The insurance company found that a majority of Gen Y and Millennials turn to their parents for help and guidance on financial matters, including insurance, rather than looking for a policy that best fits their needs. This campaign targets that behavior.

The ads appeared May 6 on Facebook’s Premium Video Ads.  Progressive is the first brand to use the medium, says Jonathan Beamer, Progressive’s marketing strategy and innovation business leader.

The campaign aims to demonstrate that growing up and making these choices  is easy.

“It’s a segment we’ve targeted before, and this platform gives us a different way to try and reach that audience at scale,” Beamer says.

The creative, developed by Arnold Worldwide, can be seen on Progressive’s website and YouTube. No other paid media is planned.

“This creative was developed specifically for this purpose. Currently, we only have plans to run it on Facebook,” Beamer says. “We will follow up with additional Facebook posts, maybe even an animated gif or two.”

Because of the audience Progressive is trying to reach, Facebook Premium Video Ads are the perfect vehicle to share this message, he says.

“This ad is different than anything people have seen from us before, and that’s by design,” he says “We used imagery that will make people stop for a second and look, because the NewsFeed is a crowded place, and they have a choice if they want to engage with the ad. “

Everybody knows a guy like Babyman, Beamer says. He’s social, outgoing and friendly -- maybe a little too friendly at times.  He’s a completely functional adult who confidently lives his life in all areas except one – he’s still relying on an insurance decision that his parents made a generation ago.

All of the ads end with a punching sound as the screen goes white and the voiceover states: "Act your age! Dump your parents' insurance company." "Save @ Progressive.com" then appears on screen.

“We have lots of options for a future efforts that riff off of this idea,” Beamer tells Marketing Daily. “While we love the character we have created in these spots, we believe the idea is bigger than the character in this campaign.”