Kimberly-Clark's U By Kotex Saves The Undies 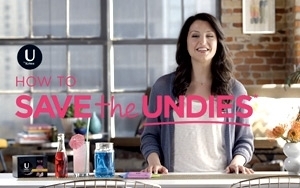 It's raining undies in a humorous new campaign for Kimberly-Clark's U by Kotex feminine care brand. The effort touts a new material innovation, "3D Capture Core," in the brand's ultra-thin products. The effort, "Save the Undies," carries the message that the new, non-woven absorbent core handles heavy menstrual flow, saving clothing from permanent ruin, and obviating the need for a bulky pad.

The campaign includes a 30-second spot in which a veritable ticker-tape parade of undies sails down as women throw them out their windows. There are also digital elements, and a redesign of the brand site with personality-based quizzes, arcade-style games and sample giveaways. There is also a big social push with #SaveTheUndies and experiential elements, including activist events and event sponsorships. The company is also offering samples. The brand has media buys with ABC Family, BET and Fox, among others. Online buys include E!, PopSugar, Glam, StyleHaul and Spotify.

Kimberly-Clark will herald the new product innovation at a New York retail event on May 18 with product experts on hand to officiate, per Kanchan Patkar, U by Kotex senior brand manager. She tells Marketing Daily that the campaign aims to appeal to younger women by avoiding the traditional way of doing feminine care product-attribute creative.

"We want to talk about the key benefit in a way that [the prospective customer] understands. The message of underwear as an ally has resonated extremely well," she says, adding that the campaign also benefits from an increased investment by the company in digital media.

"We have already been very active in social and all the more with this campaign; we have much higher levels of spending in digital and social in general and that includes on our Web site." She says social is particularly important because "It's not just the brand speaking to them, but girls, friends and family. The more people hear from others the more they will believe, so while TV and print give us reach, digital is extremely important."

On the brand-identity side, the company is hoping to re-invigorate the entire Kotex line by putting it under the U by Kotex packaging and brand umbrella. Kotex Natural Balance products will begin to feature the U by Kotex name and carry its polychrome-on-black packaging.

The brand launched in 2009 with a focus on appealing to young women by putting the product in strikingly different, multi-hued packaging that takes more from the cosmetics category than personal care.  Patkar says that the main consumer is still 18 to 22 year olds. "And we know our message appeals to girls at that age. Nothing has changed from that standpoint."