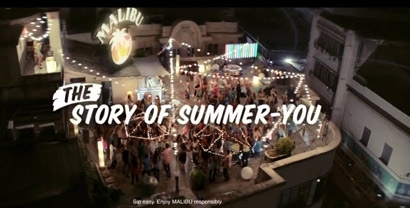 The campaign includes a new television spot positioning Malibu as "The Spirit of Summer," from Sweden's Forsman & Bodenfors agency. The 30-second ad features humorous vignettes comparing "the summer you" and "the rest of the year you." It ran during the week of May 19 and will run again during Memorial Day weekend and the week following, on networks including USA, Oxygen, VH1, Destination America and Bravo.

Digital marketing efforts are running on Vevo and Live Nation, among other sites.

The brand will be offering cocktail sampling at OneRepublic's tour stops. At some some stops, it will have pop-up cabanas and encourage concert-goers to post their "bucket lists" to their social networks to reinforce the idea of "inspiring a summer state of mind" throughout the year.

A sweepstakes at www.MalibuBestSummerEver.com is offering chances to win a VIP trip to a private OneRepublic concert in Las Vegas, hosted by the brand.

In addition, at select retailers around the country, consumers can enter contests for chances to win tickets to OneRepublic's concerts in their respective cities.

Malibu, the number one coconut spirit, saw volume growth of 6% in 2013, selling more than 2 million cases in the U.S. The brand represents 45% of all flavored rum sales and drove 5% of total rum category growth during the 52 weeks ended Jan. 4, 2014, according to Nielsen XAOC+Liquor-Washington Food. Not surprisingly, the brand sees its largest sales lifts during the summer months.