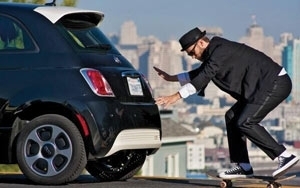 Fiat is taking a second sip of Jones Soda, but it's a bigger one. The two brands are back with a social-media driven campaign revisiting last year's "Jonesin' for a Fiat 500e" in California. This time it's a national campaign, and the car is the Fiat 500 traditional gasoline car, not the electric. The program brings both brands together around crowdsourced photography, a staple for Jones, as it uses fan photography for its label art.

Running through the beginning of November, the effort has a promotional driver dangling a 2014 Fiat 500, interactive surf lessons and photo shoot with Jones-sponsored professional surfer Brianna Cope, a GO Pro Hero 3 Camera and equipment to the winning shutterbug. That person’s photo will wind up on -- where else -- a bottle of Jones in 2015.

The campaign lets people submit photos or "selfies" to #jonesinforaFiat500 for chances at weekly prize packs of Jones Soda as well as Fiat merchandise, per the companies. The entry portals are Jones Soda's own Web site plus Instagram, Twitter and Facebook. The companies will judge shots based on quality and creativity.

Last year's campaign was California-only because both brands were launching new products exclusively for the Left Coast: Fiat used the effort to tout the 500e electric, which is still only being sold in that state; and Jones used the partnership to tout the then-new Natural Soda Line. The company last week announced that it is extending the line, now called Jones Stripped, into the Pacific Northwest, Texas and Canada.

"When Fiat and Jones got together last year, we realized that it was the start of a great collaboration and, after the success of last year's events, we definitely want to expand our partnership," said Jones Soda CEO Jennifer Cue, in a statement.

Jason Stoicevich, head of Fiat North America, said that partnership gave Fiat a photo-centric portal to tout the brand. "By utilizing the social media space to engage consumers through photography, we have been able to showcase a different side of our brand as it was captured by the eyes of the contestants."

The companies are reprising several elements of the campaign. Beyond the "Jonesin for a Fiat 500" photo contest this summer, the companies are partnering on event and sampling programs, including another presence at the Vans U.S. Open of Surfing in Huntington Beach, Calif. in July. New to the program is a Fiat dealership sampling program where buyers of vehicles at select dealerships in the U.S. can receive a set of limited edition Fiat-labeled Jones Stripped bottles. The companies said they will also be collaborating on other social media initiatives.

As for the Fiat 500e, it has only been available in California because production is limited and the state offers state and national incentives, making it more affordable there than it would be anywhere else.