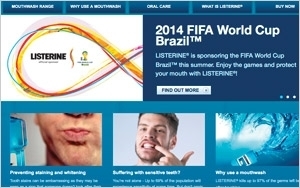 Johnson & Johnson's Listerine oral hygiene brand is activating against its first-ever sponsorship of the FIFA World Cup with a huge social campaign that wraps in real-time optimization with real-time content.

A company spokesperson tells Marketing Daily the secret sauce for the effort, “Power to Your Mouth” at #PowertoYourMouth, is the ability to maximize engagement on a dime by tweaking social conversations. "We need to reach the right audience with messaging relevant to the moment and the match."

The spokesperson says the brand worked directly with Twitter and Facebook to create customized target segments. On Facebook, the company will track which posts drive the most interaction and allocate paid media behind those posts in real-time. "By adjusting our paid media behind the social content that performs the best, we will be able to maximize our advertising dollars to deliver the strongest consumer engagement opportunities for our brand."

The brand is using Twitter TV Conversation targeting to reach fans in real-time while they are viewing and tweeting about the match.  "This will allow us to maximize the engagement of our promoted tweets." Also, per the representative, Listerine will do geo- and language-targeting of fans of football [soccer], "and in some markets based on oral care purchasers."

The company says it will have a pair of newsrooms with sport experts and illustrators in New York and London streaming content in English and Spanish on Twitter @listerineglobal and Arabic, Portuguese and Italian as well for Facebook.

The effort also aligns with a new TV spot airing in 40 countries playing on what a fan's mouth goes through in the course of a day, including the obligatory hot dogs and shouting when someone scores.

Consumer promotions to win special prizes, in-store activities and in-stadium signage are also part of the campaign. The effort is via digital agency MRY, with JWT UK having created the global TV spot, per the company rep.