Heineken Light Tastes Great, But Not On TV 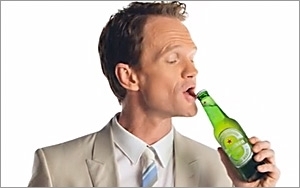 It’s hard to show off the enjoyment of a reformulated beer, when you can’t show people actually, you know, drinking it.

Heineken takes direct aim at the regulations placed on beer advertising with a new campaign, touting its reformulated (and award-winning) Heineken Light brand, with a little assistance from actor Neil Patrick Harris. The Emmy- and Tony-Award winner is shown introducing the beer as the “best-tasting low calorie lager” winner at the 2013 World Beer Championships. However, due to advertising restrictions, he can’t consume the beer on camera.

“[It’s] a product announcement campaign for the Best Tasting Light Beer with a twist: it tastes so good but certain alcohol regulations in the USA don’t allow our spokesperson to drink it on camera,” Colin Westcott-Pitt, vice president of marketing for Heineken, tells Marketing Daily. “We worked with our agency partners at Wieden + Kennedy New York to help Neil Patrick Harris embrace this challenge and to find clever and humorous ways to bring the taste experience to life on TV.”

In a new commercial, Harris’ head is only shown in the lower left corner of the frame. “Apparently, there are ‘rules’ about drinking beer in commercials, so I’m drinking it over here,” he says, before moving off camera to the sounds of the bottle opening and a satisfied, “Ahh! Tastes Good.” The commercial directs consumers to see more at a dedicated website, www.BestTastingLight.com. A video on the site features a back-and-forth between Harris and the commercial’s crew about how and why he can’t drink the beer on camera.

“Heineken is a brand that challenges the status quo and inspires people to open their world and try new things,” Westcott-Pitt, says. “... Harris is the perfect partner for that – he’s hugely talented, creative and witty and will tell our story in a unique and amusing way.”

The campaign is meant to showcase a reformulated recipe that maintains the beer’s low-caloric intake, but brings a fuller flavor, thanks to cascade hops. The brand also redesigned its packaging with a taller, slimmer neck and curved embossment.

In addition to the commercials and “BestTastingBeer” website, Heineken will support the launch with public relations, experiential and sampling (where legal with drinking-age adults) efforts.