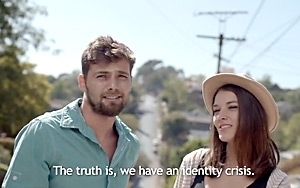 Last week, AT&T launched a Hispanic-themed commercial and documentary as part of its Millennial-targeted “Mobile Movement” campaign. The initial campaign, which launched at SXSW in March, brings to life an intangible element — the network — by telling personal stories. In the latest block of ads, which also features a 4-minute online documentary, shows how Hispanic Millennials live in two worlds, bouncing between two cultures and two languages (and often times mixing the two). Fittingly, the “Between Two Worlds” effort (from Vice Media’s in-house agency Virtue) is the first campaign from the wireless provider to feature Spanglish. Mariel Llenza, director of Hispanic advertising at AT&T Mobility, answered questions about the campaign and the Hispanic Millennial target for Mediapost.

What are you trying to communicate through this new documentary and campaign?

The campaign pays homage to Hispanic Millennials and speaks to the emotional benefit of our no-annual service-contract offering, otherwise known as “Mobile Share Value.” The documentary, #BetweenTwoWorlds, brings to life the culture element of the campaign and is an opportunity to connect with our customers on a much more human level by highlighting what it feels like for Hispanic Millennials to live in a bilingual world.

How does it fit into the Mobile Movement, and other creative elements of the campaign?

This campaign sits within the Mobile Movement platform and leverages all of our existing [Mobile Movement] communication channels i.e. YouTube and Tumblr. The campaign -- and particularly the documentary work -- is a great opportunity to discuss a cultural insight that is widely felt by Hispanic Millennials.

Why do something in Spanglish? What does it mean to communicate that way to Hispanic Millennials?

Spanglish is a language that U.S. Hispanic Millennials naturally flow into and that is what was captured in the commercials and the documentary. The Millennials featured are not actors but rather real AT&T customers, talking freely and without a script and easily moving from English to Spanish and Spanglish. Their use of Spanglish is evidence of their living between two worlds.

How are Millennials unique when it comes to marketing? How much more unique are Hispanic Millennials?

Hispanic Millennials are no different than all Millennials. However, the big difference is that they live between two worlds. Millennials as a whole are sensitive to traditional forms of marketing. They don’t like being sold to. That’s why our overall Millennials campaign uses an organic, unscripted approach where real people talk about what’s important to them. In the Hispanic version, what we hear them say is how technology helps them stay connected between two cultures. The AT&T network helps facilitate that connection. We play a much larger role in their lives than they really understand or think about on a day-to-day basis and we are letting them know by celebrating what they do, celebrating how they use the technology, and how they use the network.