It Hurts To Lose Your Cool

Apple is that rara avis among brands in that the marketing suffers from its own success. Its situation in the American marketplace grows more complex as it sheds a former cool outsider status. The iPhone and iPad lost their claim to hipness at the very moment Apple succeeded in making their devices ubiquitous. Long identified with that talented tenth of American creatives, and happy to be in the minority, an Apple product is now just as likely to pop out of Grandma’s pocket as it is from the grandson no one in the family quite “gets.” Add to that Apple’s stock slide of last year off of doubts about the Tim Cook regime’s ability to innovate in the Post-Jobs era. And layer into that its aim to bring more of advertising development in-house, apparently after some dissatisfaction with longtime agency TBWA\Media Arts Lab.  There are debates now about whether Apple or TBWA are doing a better job.

As a result of all this market success and public scrutiny, watching an Apple ad has become a lot more complicated than it once was. We used to enjoy just being dazzled by the early iPhone and iPad spots and their demonstration of app creativity and a simple design sense. The message and mode communicated brand principles seamlessly. Show, don’t sell was the reigning principle. But as Android continues to dominate the world market, Samsung’s Galaxy line evolves into a worthy iPhone competitor, and the iPad loses market share in a maturing tablet market, Apple does indeed have to do some more explicit selling. 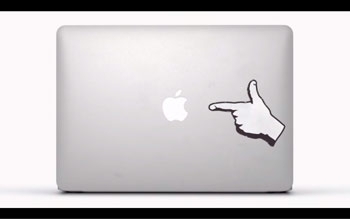 Whether developed in-house in its ever expanding ad unit, or by its agency, the Apple ads have become more of a mixed bag of late. They are uneven in execution but also are viewed by all of us through much thicker, layered lenses of corporate history.

The latest Mac Air spot is a case in point – an exercise in deft execution that still feels defensive. The spot features no applications or functions, in the usual iPhone and iPad branding mode. The focus is entirely on style – the user’s style. Titled “Stickers,” the spot shows the display lid of a MacAir tattooed with ever-changing pop culture references. This riffs off the fact that many people do personalize their laptops with appliques, but it does much more. The spot is supposed to be honoring user creativity, individuality and the principles of self-expression Apple always felt it inspired. But the ad doesn’t quite do that, even if the craft of the ad is spot on.

By using pop culture references, from Space Invaders to Homer Simpson, the ad grabs our attention because the spot suddenly is about which reference comes next and an internal contest to see if you recognize them all. And it uses a flooding technique TV advertisers discovered long ago. To fight against ad frequency fatigue you build a rapid fire compilation of content that can’t be absorbed in one sitting. The ad begs to be re-viewed in the high frequency cycles Apple media buyers seem to favor. And the ad get extra creative points for channeling the Vine vibe by including sequences of stop motion animation where the tattoos come to life. Indeed, the whole ad feels like a protracted Vine video, which is fine by us. The whole thing is driven by a techno soundtrack that engages our adrenaline as well. All in all, nice work that embodies some of the aesthetic necessities of clutter-slashing modern TV advertising.

Until that animated lid closes, spins 90 degrees to reveal its familiar slim design and triggers the tagline “The notebook people love.” This is where the ad hits a false note, even though the tag is probably true. I have gone through two Mac Airs and I actually agree that many of us do “love” the product. It is far and away the best laptop I ever owned. But that is for me to say, not the brand. It seems to me that Apple ads are least effective when they try to sell. And they are even less effective for the brand when they are trying to sell the brand rather than showing it in action. Brands may not be people, but in part we respond to them in some of the ways we do respond to people. We recoil when someone boasts about how much regard others have for him or her. It feels defensive and insecure and seems like the kind of thing they should be leaving to others to voice.

While the final note of an otherwise artful ad is slightly sour, it is enough to make the viewer realize that they just watched Apple advertise its own iconic status. Unlike most Apple spots like the relentlessly shown “Parenthood” series (just try getting that damned  “Life of Dreams”  ditty out of your head,) this ad focuses on product not process. The Apple logo is the center of attention as it is adorned with all manner of designs and shown as a brand that inspired creativity. And the payoff is a logo evolving into a product shot and a declaration of consumer love for it. Again, brands are not people, but we often can read their communications as if they are. The ones that have to remind us they are “iconic” probably no longer are. And the ones that have to tell us people “love them” probably are hoping to get that love back.