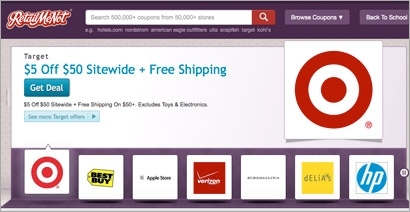 Demonstrating the power of organic listings in search engines on a company's financial profits, online deals supplier RetailMeNot reported a sharp decline in Q2 2014 earnings Monday, and attributed the loss in organic search traffic -- and presumably, ranking as one main factor.

Revenue came in slightly below the street. "The cause was the well-publicized Google SEO algorithm (Panda) changes," RBC Capital Markets Analyst Mark Mahaney wrote in a research note. Although its organic and paid-search techniques are attuned to search engine algorithms, the company's dependence on search engines for traffic means any changes to Google's algorithms could negatively impact RetailMeNot's Web site traffic.

Desktop revenue grew 27% year-on-year to $49 million in the June quarter, slightly lower than RBC estimates of $50 million, mainly due to lower desktop revenue per visit, "likely due to the Google algorithm change," per Mahaney.

Calling the downslide a "headwind against our existing plan for the second half of the year," Cotter explained the company estimates the top line impact for our full year outlook will come in at 5% of projected revenue and the impact on the second half outlook is approximately 8%, compared with guidance the company gave in May.

Mobile visits of 53 million in the June quarter rose above RBC expectation of 50 million. RetailMeNot reported that mobile app downloads grew 161%, compared with the prior-year quarter, to about 18 million by the end of the June quarter. Consumers can expect a new app before the 2014/2015 school year.