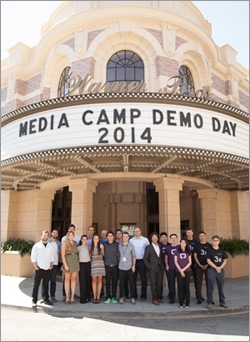 Justin Wu, chief executive officer, and co-founder Ying-Ying Lin are pitching their e-commerce platform, which allows digital content creators to easily sell merchandise next to their digital video, to investors and other interested parties.

It's around a 15- to 20-minute spiel -- produced by Warner Bros. under its “Media Camp” initiative for young entrepreneurs, culminating in "Demo Day" presentations.

After a brief video featuring an engaging movie clip, Wu talks about one key selling point: “What we are really doing is powering video commerce -- uniting content, commerce, and analytics.” Why? “Shopping online can be boring,” says Lin.

One key metric explores opportunity, according to Wu: YouTube channels aren’t making as much money as they have been -- now getting about one-third of a cent per view. Why not link up products with video?  “What we really are is overlay video technology,” he says.

Going through a detailed pitch, Wu and Lin get to the bottom line: They are looking to raise $1.2 million. And by the way, Warner Bros. is already a small investor -- as well as five other companies that are making presentations this day.

Debra Baker, senior vp of global business development for Warner Bros. Home Entertainment, who directs the program, told the audience in an introduction of the event:

“Talent is an really important core value here at Warner Bros. Our collaboration, partnership and support of talent that create amazing experiences for consumers is what we are all about.”

Other companies in Warner Bros.’ Media Camp include: Portal Entertainment, which produces episodic content for tablets using, among other things, facial recognitions of tablet owners to skew content; Bubbl, a mobile Web-based video editing tool; Wisemetrics, a company that focuses on predictive analytics for publishers; Incoming Media, a technology that enables mobile on-device machine learning for video; and Toggle, a low-priced WiFi-enabled HDMI dongle that can stream video content.

For Turner/Warner Bros. it is a way to get in on the ground floor -- not just for investment, but possible growth of their entertainment businesses -- TV programming, theatrical, home video and digital.

Warner Bros.’ Baker says: “We have to start with the primary goal: How can we enhance and build our business?” Media companies do a lot of business development meetings over the course of a year, numbering in the hundreds. Baker says: “Media Camp is a natural extension in what we do.”

Some 50 Warner Bros. executives have acted as mentors and/or have taken meetings with the Media Camp entrepreneurs -- businesses that focus on video, metrics, and other content connections -- which Warner Bros. can use to grow its businesses.

One of the more interesting companies comes from Portal Entertainment, which can take established premium movie/TV content and reimagine it for the tablet. It has deals with Warner Bros., Universal Pictures and 21st Century Fox.

The possibilities are intriguing going forward, says Baker, speaking to MediaPost Weekend: “You might get a phone call from someone in the story. The characters may interact with your calendar. It's interactive. But it’s in a short period of time -- six or seven days.”

Another business that might tempt Warner Bros. executives is one that offers up premium movie/TV content -- in smaller “snackable” forms.

Mauhan Zonoozy, chief executive officer of Bubbl, wants to make it easy for people to quickly edit a movie, or a TV show, for example, into small, bite-size pieces that may be nine seconds long. Users can then send it, post it, or use it in other ways.

Big content creators can then monetize this -- or just gain additional promotion for their movies and TV content. Right now Zonoozy says only 5% of premium content is snackable.

He tells the audience: “Our approach is that we see streams of content differently. We see it as a collection of small moments that mean different things to different people." He wants to raise $2 million.

Incoming Media’s fix? Pre-load mobile video to users based on their history/preferences, as well as using “predictive analytics” and intelligent content. No stalling; no buffering, as Tom shows in a demonstration. Using his company’s app, video content publishers can increase user engagement by three times, he says.

How much money is Tom looking for? He didn’t say -- one of the few Media Camp entrepreneurs who didn’t put a dollar number at the end of their pitch.

Before each of the six entrepreneurs start their pitch, a Warner Bros. mentor/executive offers up introductions. For the last pitch of the day, for a company called, Toggle, there was a different perspective.

The product, a Google Chromecast-like dongle, developed by Adam Johnson, chief executive officer of Toggle, is one that could be used by major entertainment retailers -- brick-and-mortar as well as digital TV/movie retailers -- to foster/sell their content business. This is an HDMI dongle that plugs in directly to consumers' TVs.

Mike Takac, executive vp of sales for Warner Bros. Home Entertainment, gives the introduction, which includes a description of the first meeting with Johnson: “We all acted that we didn’t like what he was pitching -- and looked appropriately bored. But after we walked out of the room, we were really jazzed.”

Takac then was more revealing, in a somewhat joking way: “I was not his mentor; I'm not even a good friend of Adam's. The reason that I’m here is that I’m an ardent supporter of the product.”

Turns out that in addition to its initial small investments in other companies through Media Camp, Warner Bros. upped the ante -- making an additional, more significant investment in Toggle. Toggle also has a major deal with a big retailer -- yet to be announced.

Johnson starts to speak -- but believes Takac offered up a good lead-in: “Well, thank you, Mike. [Now] I probably don’t need to explain myself about what I do anymore. A lot of this is going to be stuff you just heard.”

But actually there was a lot more to say -- and sell -- to the audience.