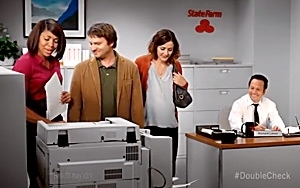 The integrated campaign marks the start of a relationship with Lorne Michael’s media and entertainment company, Broadway Video Entertainment and its Saturday Night Live properties as SNL celebrates its 40-year anniversary.

The characters Hans and Franz (played by Nealon and Carvey) and Richmeister (played by Schneider) first appeared 20 years ago.

In the debut spot, “Steve’s Kid,” State Farm Agent Ashley saves her customers money with a “Discount Double Check” and  they run into a surprise guest in the copy room.

The effort also features a digital and social branded content push that includes search and social media-relevant online videos that will reach consumers without taking them out of the moment and a “Double Check the Archives” consumer promotion.

The new commercials and branded content build upon the success and expand the reach of previous work that resulted in “Discount Double Check” becoming part of the current pop- and sports-culture lexicon, says a representative from DDB Chicago.

The “Discount Double Check” move and terms like “grill class” have transcended the advertising world and are frequently used in social media and personal conversation, the agency representative says.

Aaron Rodgers will continue his three-year relationship with State Farm and the Discount Double Check, appearing in two of the four new spots. The campaign will focus on the broader general market, while continuing to appeal to the football/sports audience.