Marc LeBrun: Engineering The Prototype Of The Original Apple Macintosh 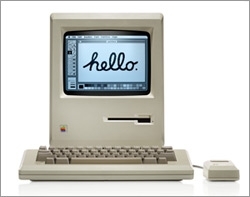 What do you think about after being one of the co-inventors of the original Apple Macintosh? I had the pleasure to speak with engineering genius Marc LeBrun. On Thursday, Vungle announced that LeBrun will lead the engineering team for the video ad company. Some of the more interesting tidbits of his discussion with MediaPost didn't make it into the article. So here are his additional thoughts on the future of apps, advertising, artificial intelligence and technology. (I still have one of those original Macintosh computers, along with a portable Compaq, in the rafters in my garage.) My first personal computer, Apple's Lisa 210, came before the Mac. For the first few years of my daughter's life, I became a stay-at-home mom and built a business around the ability to design brochures for local businesses.

The Mac turns 30 this year. Apple created a timeline to celebrate some of the milestones.

Search Marketing Daily: What is your vision for video advertising and search in apps?

LeBrun:  We shouldn't look at an ad as a foreign object, but rather part of a collaborative interaction between several pieces. A lot of the success requires technology to mediate the process. There's been talk for many years about ecommerce, but strangely, the one place it really works at computer speed is advertising and electronic marketplaces because it's basically electronic property. We will work to create a better understanding of the requirements for that collaboration, and Vungle tries to make co-collaboration as successful as possible.

SMD:  Will we deep-link to advertisements in apps to provide what Google executives describe as "an informative content" rather than an ad?

LeBrun:  I've always been interested in semantic technologies. There's already a machine learning group at Vungle that will initially take on straightforward things, but there's no limit to how far we can go with using technology to amplify the right thing that presents the correct piece of content. No one wants to be shown an ad for something they can't use. It requires a rich data source. The decision on what to present at the right time must be made by the app developer, advertiser, and the user by modeling behavior and user intent.

What is an app exactly? Today, we tend to think of apps as an entertainment experience, but there's no reason we can't turn an app into an educational experience or empower the user through a social connections. Then we ask, what's an ad? An ad is content put into a framework that can dynamically associate with the query or the task.

I asked LeBrun how it feels to have changed the world with the entrance of personal computing devices. He said just wanting to change the world is a limited objective. Change it for what? It makes us feel more validated. You discover something useful in the sciences and people applaud. The deeper question is -- what's the meaning or importance?

For LeBrun it comes back to being able to participate in making a bridge with some of the accumulated technological power for the good in people's lives. It's a mixed feeling, he said. There's some gratification and enthusiasm that comes from saying yes, we helped put that technology in people's hands. Then there's another aspect of never being satisfied and wanting to take the technology to the next level. "A lot of times when I look back on the Mac, I don't want to spend time patting the team on the back saying we got this one thing right," he said. "I think about the missed opportunities and how to make them work today."