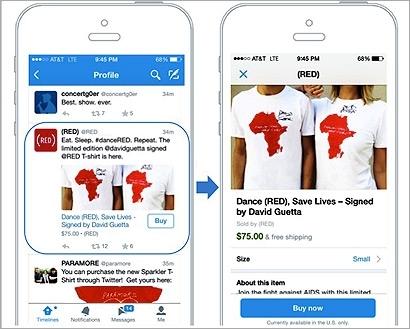 The ecommerce feature, which initially was intended to support selling timely items from bands like T-shirts and event tickets, could eventually create a new revenue stream for Twitter. The company partnered with Fancy, Gumroad, Musictoday, and Stripe platforms for the initial test, with more partners to follow. Artists will include Keith Urban, Hunter Hayes, and Soundgarden, as well as brands like Burberry, and The Home Depot.

In the United States, eMarketer estimates Twitter will account for 1.6% of digital ad spending this year -- up from 1.0% in 2013 -- and on mobile devices that percentage rises to 3.5% of the U.S. mobile advertising market this year, up from 3.1% last year.

Local search plays an important role in ecommerce, especially when selling concert or local event tickets. Discovering and buying products directly from a tweet on Twitter comes as more social sites like Pinterest and Facebook have begun to experiment or implement buy buttons. As for the Twitter service, a small percentage of U.S. users will see the ecommerce feature in some tweets from test partners, per Twitter. Two Tap also created a tool that works with any online application.

The sequence of events that is changing ecommerce suggests that search engines like Google and Bing will follow social media. It would keep consumers and clicks on engines to complete searches and transactions, rather than send them to a brand's Web site. It would keep results relevant while increasing the amount of clicks on the search engine, allow competitive brands to compete for the sale longer through paid search ads, and give the engines a percentage of the competed sale.

In a section titled "Commerce Services" Twitter explains its registered card data service and reminds consumers that they may provide merchants with personal information such as credit or debit card numbers, shipping addresses, and more to complete a transaction. Twitter will store the payment information, excluding the CVV code, and shipping address, which the consumer can remove from their account at any time using your account settings.

Twitter will share payment information with service providers. "If you buy goods or services on Twitter, we may provide the seller, commerce provider or marketplace with your name, email address, shipping address, Payment Information and Transaction Data to facilitate payment processing, order fulfillment and dispute resolution (including payment and shipping disputes) and to help prevent, detect and investigate fraud or other prohibited activities. Please refer to these third parties’ privacy policies for information about their privacy practices," per the privacy policy.