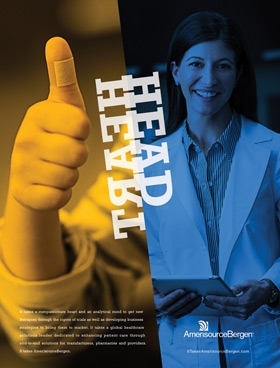 Pharma company AmerisourceBergen is launching its first-ever unified corporate advertising and its largest ever media buy.

The Valley Forge, Penn.-based company, which is ranked 28th on the Fortune 500 (ahead of Wells Fargo, Boeing and Procter & Gamble), aims to convey the breadth and depth of its healthcare distribution operations.

Previously, only its much smaller subcompanies (World Courier of Stamford, Conn., or AmerisourceBergen Specialty Group of Frisco, Tex.) had advertised. The current campaign, tagged “It takes AmerisourceBergen,” is the first work by creative and media agency-of-record Tierney, Philadelphia, for its new client.

“The journey to a complete ad campaign taught us that we need to think differently about ourselves in order to allow our customers to think differently about us,” Gina Clark, AmerisourceBergen chief marketing officer, tells Marketing Daily. “We took a four-phased approach (discover, design, develop, deploy) and sought the counsel of agencies partners, such as Tierney, and perspective from our associates along the way.”

The primary vehicle is print. Five full pages run as targeted cover wraps of nine summer and fall issues of Fortune magazine and as run-of-book pages inside two dozen drug, physician and pharmaceutical titles. In each, a “mirrored” headline pairs a predictable, logistical or technological, corporate strength with one that is more personal or emotional.

The ads’ pairings appear generalized, but each is rooted in a specific, if unnamed, example. “Head/Heart,” for instance, is based on afield nurse in Canada, Catherine Sabbah, who embodied both the warm, “people” skills one might expect of a nurse and also intricate, analytic/scheduling expertise. (Sabbah does not appear in the ad, a model stands in.)

“Horsepower/Brainpower,” is based on the contrast between AmerisourceBergen’s World Courier, which deals in global drug distribution, and its Good Neighbor Pharmacy brand, whose best practices enable a small-town Montana pharmacy to stay open for its community.

“In the end, we combined words like horsepower and brainpower, computers and compassion, and hindsight and foresight to create a campaign that conveyed the dynamism, the duality, the scope and breadth of the skills visually and verbally,” Clark says. “We brought people something they hadn’t seen before; gave them a reason to pause and to take a second look.”

The campaign’s print media is supported by Flash, rich media and pre-roll video banners and by a microsite, ItTakesAmerisourceBergen.com. It will also be used across event marketing, human resource, legal, and investor relations platforms.

“It is incumbent upon us to tell our story,” Clark says. “An ad campaign is a natural extension of the creativity and innovation we bring to our customers to drive awareness and start a dialogue around our brand.”