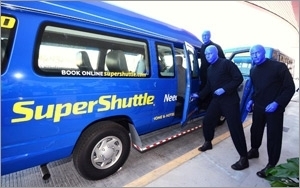 The joint venture will run through summer 2015.

“With the recent launch of SuperShuttle in Boston, another home to Blue Man, it seems like a prime opportunity to not only co-promote our brands," Harris says in a release.

SuperShuttle will communicate Blue Man entertainment offers for Boston, Las Vegas, and New York City throughout the customer's travel experience, including Web site, online booking system, email, and advertising on the vans, which are the same shade of blue as the performers in the entertainment group.

Blue Man will feature a SuperShuttle discount offer for airport transportation through its Web site, email, ticketing channel, and in-venue placements. In addition, the brands will share in select campaigns, such as in-flight magazine advertising, boarding pass advertising, and social media.

"We hope our customers will have fun with the co-branding of these two innovative brands," said Ken Testani, senior vice president of global marketing and partnerships at SuperShuttle, in a release. "We like to have fun and provide a spectacular service, and so does Blue Man Group."

SuperShuttle International, based in Phoenix, is a division of Transdev On Demand, Inc. The company serves over 40 airports, carrying more than eight million passengers a year.

Blue Man Group is a multinational media and entertainment company with theatrical and digital media operations across three continents, permanent live performance installations in six cities, an ongoing theatrical tour of the USA and Canada, as well as on Norwegian Cruise Line's Epic.