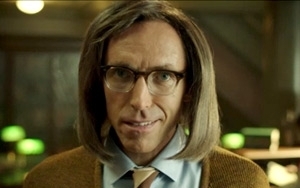 When your product name includes the initials “MVP,” it helps to have a few real ones around to back you up.

For its DailyMVP fantasy sports app, TopLine Game Labs has enlisted two-time NBA MVP Steve Nash and two-time NFL and Super Bowl MVP Tom Brady to appear in a new marketing campaign that encourages consumers to “Have an MVP day.”

In the first spot (from agency BarrettSF), Nash appears dressed up as a timid librarian, complete with shoulder-length hair and glasses. “I love being a librarian,” Nash whispers to the camera. “But some days can be a little quiet.” He explains that the DailyMVP app adds excitement to his life by allowing him to challenge his friends and “dominate at game time.” “Now, even a librarian like me can feel like an MVP.”

Unlike season-long fantasy leagues, DailyMVP’s games last from a single day to a week long, cutting down on time commitments and offering a refresh after a bad week. The campaign is intended to highlight the fun of playing over the heavy strategy that goes into more involved fantasy contests, TopLine CEO David Geller tells Marketing Daily.

“We feel the campaign represents the fun and lightweight nature of our product,” he says. “Our games are meant to be easier to play than other games that are geared more toward a hardcore fan.”

The spot, currently running on TopLine’s YouTube channel and in online digital channels, is timed to take advantage of the start of the NBA season this week, Geller says. A second spot featuring Brady in an equally unexpected role will begin running later in the year, timed to take advantage of the end of the football season, when many season-long fantasy players have already been eliminated from their leagues.

“By mid-season, a lot of people are out of contention with their season-long games, but they are still interested in fantasy sports,” he says. “Someone of Tom Brady’s caliber is going to resonate throughout the year.”

The campaign, which will also include radio and print elements, will run in sports-themed programming and Web sites. “Anywhere you’ll be seeing a sports article or hitting a site relevant to our demographic is where you’ll see us,” Geller says.