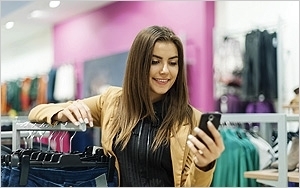 This week brought more research suggesting that mobile will play a bigger role than ever in online holiday shopping this year, rivaling desktop as the source of most visits and browsing on e-commerce sites. The most recent study, conducted by customer relations specialists CFI Group on behalf of eBay Enterprise, surveyed 1,000 U.S. consumers about their previous usage, current mobile behaviors, and plans for next year.

According to the report, titled “Holiday Shopping 2014: Mobile on the Rise,” the proportion of consumers who have made a purchase via a smartphone in the last six months increased from 59% in 2013 to 70% this year. Fifty-seven percent said they have used their smartphone while shopping in a store, and within this group, 63% use it to check pricing at other stores, 60% check prices online, and 52% read recommendations and reviews. Looking ahead, 41% of consumers surveyed said they plan to make even more purchases via their smartphones next year.

Asked which mobile channels they prefer, 54% of consumers surveyed said they used both mobile commerce sites and apps on their smartphones, but overall respondents favored mobile sites over apps by a margin of more than two-to-one.

While mobile commerce is clearly on the rise, consumer concerns seem to be growing in tandem: this year 42% of consumers said they worried about the security of mobile transactions, up from 34% in 2013. To combat this trend, the report suggests that retailers begin “highlighting their mobile transaction security measures on the device interface.”

There are also a number of areas where mobile commerce platforms fall flat: 53% of respondents said smartphones aren’t as helpful as they’d like as mobile shopping aids -- somewhat improved over 61% who had the same complaint last year. Consumers are also distinctly unimpressed with the performance of mobile-equipped in-store personnel: 74% have never received assistance from an associate with a smartphone or tablet, and among the group which did receive this kind of assistance, 55% said it “didn’t help them at all.”

Last week I wrote about a forecast from IBM, predicting that for the first time ever this year, mobile devices will account for 53% of all visits to e-commerce sites during the Thanksgiving holiday season, beginning Thanksgiving Day and extending through “Cyber Monday.” That's up from 39.7% last year. And 48.2% of all online product browsing will be on mobile devices, almost double last year's figure.