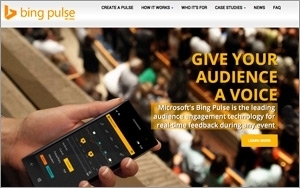 Microsoft recently launched Bing Pulse to provide real-time sentiment analysis at live events, but how can brands use the technology in advertising campaigns? While traditional "sponsored by" campaigns seem a bit boring for this real-time platform, the technology could build on a focus group to provide instant access to what hundreds of consumers scattered worldwide might think about a product color or package design.

There are several ways that marketers can use Bing Pulse for various campaigns, such as advertising or message testing in a controlled forum, which the producer can modify on the fly based on consumer response. They also can use it as a second-screen experience during a major event. Doritos, for instance, could sponsor a Pulse during the Super Bowl and power a second screen, interactive audience experience for the game or for their ads. Think about social marketing that would work similar to Twitter.

Pulse creates a large focus group. Automobile engineers trying to design a control panel could hold a live-stream broadcast asking consumers to come and help design the next Audi dashboard, says Greg Shaw, a senior director at Microsoft. "You might do that early in the design process and give people options, pitching the benefits and the drawbacks," he said. "Through Pulse, the automaker would get real-time sentiment. You could see if men or women like the feature. I would give you pretty rich data."

Pulse started in news and politics, but Shaw said teachers could use it in school to gain feedback from students. It would allow teachers to query students to see what they learn during the course of their lectures. He also expects the company to use it for meetings, workshops, and sensory response.

Since the self-service platform just launched, Microsoft has yet to announce brand customers, but plenty of events and major networks such as CNN, Fox News, MSNBC and others have used Bing Pulse as part of TV programming.

"We know that 80% of people engaging with a second screen when watching television, conferences and live events," Shaw said. "Bing Pulse engages people in content. Brand marketers put time and energy into attracting an audience to see content, and you don't want them distracted."