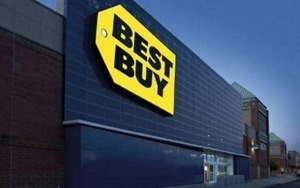 Best Buy says its holiday selling season was stronger than expected, powered by gains in the sales of large-screen TVs and phones. But sales of tablets were considerably weaker, and the Minneapolis-based retailer warns that it expects sales to be flat to declining in the first half of its fiscal year, as the hoopla surrounding big-product launches quiets down.

Comparable-store sales in the U.S. rose 2.6% in the seasonal nine-week period. “A compelling merchandise assortment, strong multi-channel execution, and a more favorable year-over-year macroeconomic environment drove these better-than-expected results,” says Hubert Joly, Best Buy president and CEO, in its release. “We were also able to capitalize on the product cycles in large screen televisions and mobile phones.” And online sales climbed 13.4%, “driven by higher conversion rates and increased traffic.”

As a result, it now expects fourth-quarter sales to be up 1% rather than flat, as it had forecast earlier.

The company also says the gains are a validation of its focus on “delivering advice, service and convenience at competitive prices,” which it plans to make the foundation of its strategy in the year ahead.

While those results are encouraging, it also warned investors that it expects the industrywide decline in consumer electronics, which the NPD Group puts at 3.7%, to catch up with it soon. “We believe that the positive domestic sales trends that we saw in mobile phones and home theater during the holiday period  … were partially driven by the excitement around high-profile products and will not likely continue at holiday levels,” it says.

Sales in its international division dropped 11.7%, pressured by unfavorable currency exchange, closures of some Canadian stores, and a decline in Canadian demand for electronics. (Last month, the company announced its intention to sell off its business in China.)

Meanwhile, Radio Shack is reportedly close to filing for bankruptcy, which would help Best Buy improve its market share.