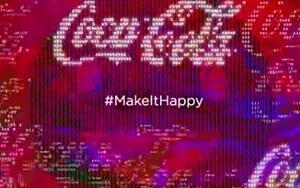 Building up to the debut of its new 60-second ad during the first quarter of the Super Bowl, Coca-Cola is releasing three teaser videos and four supporting "vignettes."

The full ad won't be revealed prior to the game, but the teasers are being aired on TV and in cinemas, starting today. The vignettes are being released over the course of this week on the Coca-Cola Journey site and the brand's social channels, including YouTube (where the teasers can also be viewed).

Coca-Cola states that the goals of the ad, which ends with the hashtag #MakeItHappy, are nothing less than to "tackle the pervasive negativity polluting social media feeds and comment threads across the Internet" and "promote positivity both online and in the real world."

The spot, from Wieden+Kennedy, Portland, is "intended to disrupt the complacency that’s set in around online negativity,” said Jennifer Healan, Coca-Cola’s group director of integrated marketing content. “Our goal is to inspire America to become a collective force for positivity.”

The teaser ads offer glimpses of some of that online negativity and the #MakeItHappy call to action, with one declaring that "The Internet may never be the same."

Some of the vignettes offer personal stories of online negativity from teens and adults who have experienced it, including race car driver Danica Patrick and football player Michael Sam. Others profile people who strive to spread happiness online, including a nearly three-minute video on "Kid President."